You can tell the Summer is coming to a close, with most of the heavy-hitters now squarely behind us. This is reflected in this week's line-up of reviews, beginning with Martin R. "Vargo" Schneider's take on Takers. Joseph "Jay Dub" Wade follows this up with a review of the (mostly) engaging horror "mockumentary" The Last Exorcism.

EXPECTATIONS: I'm torn here. On the one hand, I love heist films to the point where I might be on an FBI watch list due to my rental history. On the other hand, the thought of seeing Paul Walker and Hayden Christensen on screen together makes me wonder why the producers hate me so much. (That's a lie, I know what I did.) Plus it has not one, but TWO recording artists/actors whose criminal cases delayed the movie, and a rookie director? Forget being torn, how often in your life are you given the exact time and date for a train wreck?

REALITY: Takers opens with a small bank heist, with very little introduction to any of the characters, but that's fine. It also features a ridiculously complex plan that culminates in the burgling of a news chopper. Short of a military jet filled with GPS receivers, I can't think of anything easier to trace and locate, but this gives everyone involved a chance to walk toward the camera, away from an exploding helicopter, so we can forgive that. Silly, sure, but also simple and effective. Unfortunately, the latter two words can not be used to describe the rest of the movie. 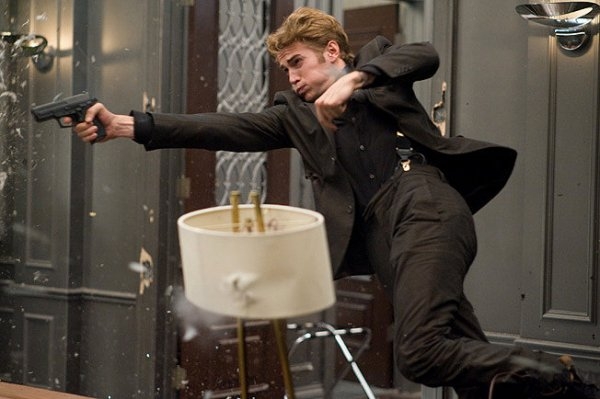 Guns are very dangerous. I hope you're going to pay for that lamp.

The crew's celebration gets interrupted by Ghost (Tip "TI" Harris), a former cohort who was shot and arrested six years ago during a job. The gang is naturally hesitant when Ghost offers them a new heist, especially since Jake (Michael Ealy), one of the leaders, has just proposed to Ghost's former girlfriend Rachel (Zoe Saldana, clocking in ten minutes of screen time to appear in her 500th movie this year). If any of that sounds interesting, it's not. Saldana is completely wasted in this film, and the tension between Ghost and Jake is never thick enough to make you care. What follows is a standard planning-the-heist setup, where we are never given any proper backstory or sense of personalities. I suppose this is appropriate when one of your leads is played by Hayden Christensen, whose definition of "Method Acting" boils down to "Wearing a Stupid Hat."

The whole time, the crew is being investigated by LAPD Detective Jack Welles (Matt Dillon), a beautiful one-note character that might as well have been called Detective Hard-Boiled McHardass. McHardass is a standard loose-cannon-cop-on-the-edge-playing-by-his-own-rules, except this time he has to dodge an Internal Affairs investigation, because it turns out there's a reason why you don't play by your own rules. Someone could get hurt. If any of that sounds interesting, it's not. Welles is frequently demonstrated to be less "badass" and more "inept," to the point where we see him endanger his daughter's life to watch dangerous criminals go to a hot dog stand. We see him slash the tires of a known arms dealer to gather critical information. That seems pretty cool. The information in question? "Those guys who bought all those explosives? I think they want to blow something up." Great job, McHardass. You deserve an IA investigation. 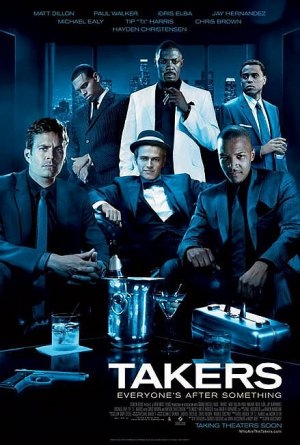 The unforgivable photoshop disaster that is the Takers poster.If it sounds like I'm chastising the lack of character development in Takers, I'm not. Quite the contrary, it works to the film's advantage. Takers has a very simple story to tell: It is quite literally "cops and robbers." It's completely possible to make an entertaining movie with that premise; many films have done so. Takers is completely aware of this, to the point where it references many of the films from which it obviously takes inspiration. Off the top of my head, The Italian Job is name-dropped directly, Paul Walker delivers the whitest version of "SPEAK ENGLISH!" a la Pulp Fiction, and there's a culminating hotel room shootout like True Romance. This film is beautifully self-aware, and it knows what you want it to do. When it's actually doing it, it's better than it has any right to be. That said, it'd be nice if the crew had a name or something to distinguish the members other than "White Guy," "White Guy with a Hat," "Black Guy," "Black Guy's Brother", "Tall Black Guy," and "Black Guy Who Talks Like A White Guy Trying To Be Black" (Walker, Christensen, Ealy, Chris Brown, Idris Elba and TI.)

When the film strays from its simple formula, it doesn't work at all. Many subplots go nowhere. Elba's character is given a sister he's putting through rehab to make him more sympathetic, but it just makes both characters more annoying. Detective Welles' IA investigation provides an interesting, if predictable twist, but it also makes us sit through a ton of being shown he has a heart of gold, when all we want to see is The Chief telling him "hand in your badge, you're off the case, McHardass!" (This never happens.) The Ghost-Jake-Rachel love triangle is never given wing, and as a result, it seems like we're supposed to believe this is an issue because the characters tell us so. I'm not even sure all these characters were necessary; there's a six-person gang that could have been done with four. Takers goes from enjoyably simple to annoyingly convoluted and back again before we realize what's happened.

Novice director John Luessenhop (his only other title, the prison flick Lockdown, starred Master P) definitely chooses style over substance here, and sometimes it works, sometimes it doesn't. We have to deal with a lot of shaky-cam action scenes, because modern audiences don't like being able to see what happens when people are fighting, and the occasional unnecessary slow-mo shot, as if he has to remind us who the people we've spent the past two hours with are. (Admittedly, in this film, that might be a legitimate concern.) His pacing is perfect for the first half of the movie, where he throws us into this world and refuses to let go of the important stuff. The first half of Takers is somewhat similar to Inception, in that no line is delivered that isn't absolutely essential to moving the plot along. (That is the only comparison anyone will make between these two films, ever.)


Takers, though, backtracks in the middle, as if they couldn't fill a full two hours and decided to tack on as many plot-dragging side notes as possible. Then, as if by magic, it remembers to be a good movie again and pushes forward through a strong third act, including an incredibly fun foot chase that actually builds dramatic tension, despite ending exactly the way you expect it to. This builds the film up a bit, only to have it drop the ball again with an unsatisfyingly vague conclusion.

Takers is a bit of an exercise in frustration. Every time I found a reason to forgive its faults, it would immediately cancel this reason out. I can forgive the wooden performances, because this doesn't start off as a performance-driven film. Just as I'm willing to forgive the weaker parts of the Expendables script; that's not what I paid to see. I'll put up with the actors' attempting to use charisma in place of talent, because I paid to see some money get stolen in an entertaining fashion. Then they mess it all up by adding unneeded drama, like the crackhead sister and Detective Welles' PARTNER'S kid having cancer, and it completely blows what leeway they had. (Not even his kid, his partner's. This is how far they were stretching for story here.)

I'm willing to overlook the annoying action sequences at the beginning, given that the shaky-cam is a popular, albeit hackneyed, stylistic choice. Then the movie progresses and I see Luessenhop is capable of delivering an action sequence that doesn't look like a fingerpainting, and the earlier scenes just seem lazy. I'm willing to forgive Hayden Christensen, because Episodes Two and Three weren't all his fault, but then he just looks like such a douche.

MINORITY REPORT: What is going to hurt Takers more than anything is the poster and that stupid title. Describing someone as a taker carries connotations that the target audience for this are going to giggle at uncontrollably, and I don't blame them. -Ian "ProfessorClumsy" Maddison