Need For Speed; Knights of Badassdom; The Grand Budapest Hotel

If you have a requirement for high velocites this week, we have just the movie for you in the form of Need For Speed, an adaptation of a video game that mostly delights Martin R. "Vargo" Schneider. Joseph "Jay Dub" Wade, meanwhile, is less delighted by LARP-based comedy Knights of Badassdom and Ian "Professor Clumsy" Maddison is mostly delighted by The Grand Budapest Hotel, although it will probably prove divisive.

EXPECTATIONS: I am actually excited for this, albeit cautiously. A cast which contains Aaron Paul, Dominic Cooper, and Imogen Poots is incapable of making a non-entertaining film. I'm also a sucker for films in which cars drive very fast and things explode, usually other cars driving not-quite-as-fast. I am hesitant, because video game adaptations have a bad reputation, and because it feels like this film is trying to cash in on all the goodwill that it took the Fast and the Furious franchise several films to earn. Two factors keep me hopeful, however:

1) As far as I can tell, the Need For Speed games don't really have any sort of a plotline. (Please don't e-mail me and correct me on this.)

2) The film comes from Act of Valor director Scott Waugh, and for all its faults, that movie did a pretty good job of being a video game.


REALITY: Well, pretty much everything I expected from this film was delivered upon, so I really have no reason to complain, right? Well, yes, of course I do. It's my job. Don't worry, they're small complaints, I'll only spend a paragraph or two on them at most.

After being released from prison following the street-racing crash which caused the death of his friend Pete (Harrison Gilbertson), former stock car racer Toby Marshall (Aaron Paul) assembles the rest of his mechanics team (Remi Malick, Kid Cudi, and Ramon Rodriguez) in order to enter a secret underground winner-take-all race assembled by mysterious eccentric billionaire The Monarch (Michael Keaton), where he plans to take revenge on his rival Dino (Dominic Cooper), who set him up for the crime in the first place. That incredibly long sentence sums up about 80% of the plotline of this film, and I haven't even mentioned where Imogen Poots fits in all of this. Or that most of the movie is a cross-country journey to get to the starting line in the first place. Or any of the other three or four subplots that pop up along the way in this movie whose central conceit is "fast cars go fast."

What I'm saying is that the screenplay and storyline are the weakest points of this film, which shouldn't come as a surprise, but also pads the film out to an unnecessary two hours and ten minutes, as we checklist every possible racing movie cliche and try to ram them in as quickly as possible. Hell, an entire half-hour goes by establishing that Toby and Company built some sort of Magic Mustang before he is even sent to prison to begin with.What the film does do well, however, is establish a role for everyone and a spirit of camaraderie amongst the team immediately. While the FF franchise decided at some point that everyone has car-based superpowers and oh, Ludacris is the smart one, I guess, Need For Speed shows you exactly what this team's strategy is and how it works for them. Particularly clever is the use of Kid Cudi's character Benny, who watches the road from above (using increasingly-ridiculous aircrafts), to alert Toby of cops, traffic, or other incoming issues. It lampshades one of the many cliches this film is based on, and while it's incredibly silly, I rather enjoyed it. 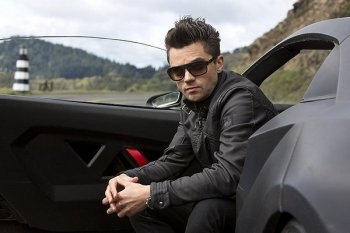 Dominic Cooper is the new... I don't know... David Warner or something.

What the screenplay lacks, the rest of the film makes up for, especially in the most technical aspects. For all its political and moral issues, Act of Valor was an incredibly interestingly shot and well-made film. Need For Speed continues in that vein, and as Waugh and DP Shane Hurlbut team up again to deliver a series of surprisingly beautiful shots and intense racing sequences. Waugh is the kind of guy who would rather have Aaron Paul hit him with a car than screw up a shot, and I love him for that. Lighting and sound are also played with extensively. Most of the film takes place within a 48-hour period, and Waugh uses that to his advantage, setting the lighting and color palate not only to match the mood of the scene, but also to reinforce his sense of urgency, reminding the audience that Toby is racing not only against cops and other drivers, but against the sun as well. Sound design-wise, the film blends the roar of the engines with fireworks, train horns, sirens, and other outside dissonance to create a more intense immersion.

Need For Speed is a bold experiment, attempting to combine the street racing/car fighting ideals of the Fast and Furious franchise with the less contemporary long-form cross-country chases like Cannonball Run or Smokey and the Bandit. This is a mixture that requires Aaron Paul to play both Paul Walker and Burt Reynolds, while still carrying over much of his Jesse Pinkman persona, and he probably could have done it, had he been handed more to work with. The biggest failure in his role is that he is relegated to silent and brooding form most of the film, when he has natural comedic timing and charisma. When he, and everyone else involved, embrace the silliness, the film becomes a lot of fun. This is a film where Michael Keaton plays the Greek Chorus, waxing poetic about racing and art and story, a film where Imogen Poots fakes a southern accent and plays chicken with a Hummer, and a film which is clearly okay with achieving the goal of "being slightly better than 2 Fast 2 Furious." Setting the bar low does not mean you shouldn't still get credit for clearing it.

MINORITY REPORT: I really hope this movie does well so I can finally convince a producer to greenlight my Cruisin' USA movie. Cars doing backflips! Off of Mt. Rushmore! In 3D! - Joseph "Jay Dub" Wade