EXPECTATIONS: Somehow, I've managed to miss the trailers and the posters for this one, leaving me with almost no idea as to what it even is. But David Gordon Green's involvement after the abysmal Your Highness gives me very little hope for The Sitter.

REALITY: For readers who haven't seen Adventures in Babysitting, the plot of The Sitter might seem fresh. Underdog nerd Noah Griffith (Elisabeth Shue/Jonah Hill) takes a last-minute babysitting job that goes awry when he ventures into New York City, three kids in tow, to track down a girlfriend who treats him like shit (Bradley Whitford/Ari Gaynor) -- only to find real girlfriend material (Keith Coogan/Kylie Bunbury) where he least expects it. Comic mayhem ensues. 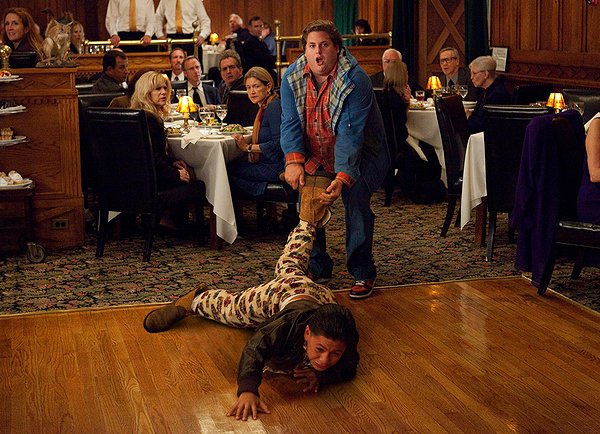 The Sitter's dependence on the tried-and-true night-from-hell formula leaves few surprises for anyone who's seen the aforementioned Adventures in Babysitting, or, for that matter, After Hours, Eyes Wide Shut, Superbad, Judgment Night, The Devil's Rejects ... oh, bother. You get the point. Noah crosses a drug dealer, wrecks his employer's car, steals from his father's jewelry store with tragic consequences (Before the Devil Knows You're Dead, anyone?), teaches the kids a thing or two about self-worth, and walks away completely unscathed, despite having committed more than a few felonies.

The movies from which The Sitter steals worked because their characters existed in a world of consequences. Meanwhile, The Sitter asks us to stretch our suspension of disbelief to the breaking point and keep watching, which might have worked if The Sitter were even remotely funny.

Hill's a reasonably funny guy, having carried Get Him to the Greek and Cyrus all by his lonesome, but in The Sitter, he misses the mark entirely. So does everyone else, including director Green, whose bizarre career trajectory has turned him from indie darling into a purveyor of noxious, unfunny shit -- Pineapple Express notwithstanding. 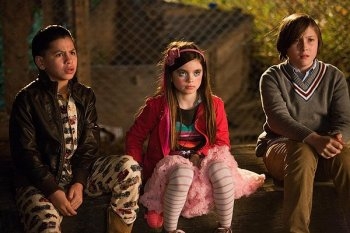 I understand how you kids feel. I couldn't believe it either.In his first film since the wonderful Where the Wild Things Are, Max Records essays the only character with any depth: a gay 13-year-old prone to anxiety attacks because he's still in the closet. Shock of shocks, Green fails to allow Records the full-on freakout The Sitter's always building toward despite Records' capability of expressing hyperbolic rage (a skill used to tremendous effect in Where the Wild Things Are). Instead, Hill conveniently resolves the only interesting subplot in The Sitter by giving Records a swift pep talk that amounts to: "You're gay, deal with it." They hug, and The Sitter rolls on to spend far more time on far less interesting subplots.

Absent of jokes, The Sitter is also absent of necessary exposition that, given its 81-minute running time, was probably excised and left to rot on the editor's floor. The Sitter bounces us between sketches with an increasingly ludicrous plot to tie them together, fails to fully define its characters and pays undue attention to sappy moments in which Hill, introduced at first as a clueless manchild, hands down paper-thin life lessons to the characters surrounding him.

Green -- who, once upon a time, directed George Washington, All the Real Girls and Undertow -- should know how to earn dramatic moments by now, even within the framework of a comedy, as evidenced by Pineapple Express and his work on Eastbound & Down. Here, the dramatic moments bring The Sitter to a halt, making for the longest 81 minutes in recent memory. While the loss of necessary exposition would normally be considered a fault, here it's an act of mercy.

MINORITY REPORT: This kind of generic and redundant rehashing of old ideas is holding cinema back. It's not as artistically void as a film that pushes consumerism and institutionalised racism, but it's still pretty damn shameful. - Ian "Professor Clumsy" Maddison