EXPECTATIONS: I hate to cast a cynical eye toward this year's Oscar Bait, but there's something about The Descendants that just looks forced; something I can't quite put my finger on. Maybe it's the double-team of director Alexander Payne and George Clooney. That's a team designed to make Academy members throw up their votes and scream "MAKE IT RAIN! MAKE IT RAIN!" Or maybe what's turning me off is simply Payne's tendency to turn shallow 'First World' problems into emotional dramas for comedic effect. I'm sure this will be a fine film, but I'm fully expecting it to be a cloying attempt at making the elderly cry.

REALITY: The Descendants is a number of things, but, thankfully, "cloying" is not one of them. While the film's characters and sense of humor are pretty much typical Payne, the actors do a steady job of making the story much less of a downer than it otherwise probably should have been. It's a film that takes a completely depressing family crisis and pokes little holes to alleviate the tension, usually in ways that drift dangerously close to sitcom territory. That said, the performances are so good that one can forgive the film its brief lapses of Two and a Half Men-itis. 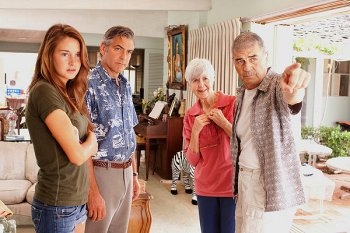 Another brilliant promo shot where everyone is enraptured by something just offscreen to the right.After a boating accident leaves his wife in a coma, Matt King (Clooney) suddenly finds himself with a dilemma. How is he supposed to juggle closing a lucrative land deal with having to raise two troubled daughters Scotty and Alexandra (Amara Miller and TV's Shailene Woodley) on his own? When his wife's condition takes a turn for the worse, Matt is forced to get her affairs in order, which includes dealing with the actual affair she had with a local realtor (reluctant pugilist Matthew Lillard). Hijinks, shenanigans, and punches to the face courtesy of Robert Forster ensue.

For all of my concern that The Descendants would turn out to be some kind of mawkish dramedy more along the lines of The Kids Are All Right or Dan in Real Life, I'd forgotten that one of Alexander Payne's strengths is crafting lead characters that actually seem to understand the circumstances of their story. Too often, these kinds of films seem to drop a character into an oddball situation just to see how they bounce around. The Descendants presents its protagonist with a genuine dilemma, one where many characters are affected by the outcome. Matt and his girls losing their wife and mother is drama enough, but on top of this Matt is forced to decide how to sell the family inheritance, acres upon acres of undeveloped Hawaiian beachfront. I can think of a dozen scenarios in which a film would take this kind of plot and have Matt treat the land issue as an afterthought. "Wealth isn't important," Alternate Matt might say, "Family is what's important." Well, yes and no.

This film understands that each decision we make in life has weight. Selling away your birthright might earn you enough money to retire comfortably, but where does that leave your kids and grandkids? What do you really stand to gain from confronting your comatose wife's lover? Why are you letting your daughter's boyfriend tag along on this family crisis? How are you supposed to keep your ten-year-old from calling everyone a twat? One by one, Matt has to tackle these issues, and Payne gives Clooney enough room for his character to breath without forcing him to pick a direction just because the plot needs to keep moving. 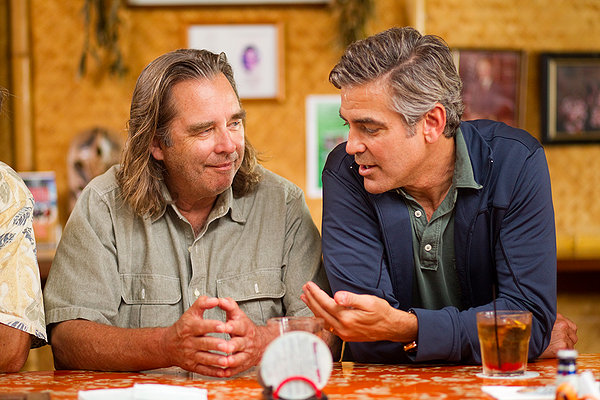 I keep telling you, don't call me "The Dude". You clearly have me mistaken for someone else.

In a way, this film feels like a 'ten years later' epilogue for what might have happened to Clooney's character in Up in the Air. Having finally settled down in paradise, the upper-class businessman who owns nothing yet seems to have it all suddenly realizes how close he is to losing what little he does have. If not for his family and his heritage, he'd have absolutely nothing at all, so his only course of action is to reconcile the two or risk losing both. There's an odd imperialist streak to the film, as Matt and his cousins stand around discussing how best to sell and cut up the profits to their huge tract of virgin Hawaiian land, but the film seems to know how deep that particular rabbit hole goes, and so it decides to steer clear of it almost entirely.

While the drama is more than enough to carry a film like this, the director's sense of humor is pervasive. It mostly manifests itself in awkward situations or quick one-liners, but then there's the character of Sid, Alexandra's boyfriend (Nick Krause). He is far and away the most broadly idiotic character in the film, and his mere presence is played for laughs. He does eventually serve a purpose in the film, but he spends too much of the running time standing around with a "Get ready, I'm about to make an ass of myself" look on his face. I'm not sure why filmmakers feel like they need to make kids either precocious or stupid to generate laughs. That's the path of least resistance, the path that sitcoms take all the time. While Alexandra manages to become a fairly rounded character, Scotty and Sid seem like they were dredged up from the Big Barrel of TV Kids We're Supposed to Hate.

Actually, now that I think about it, this film shares more in style and tone with the TV series Hung (which Alexander Payne produces) than any of his previous films, which makes sense, as the kids in that series are completely insufferable as well. Otherwise, George Clooney's performance is a recent best; he turns Matt into a character of surprising depth not because of how he emotes into the camera, but how he relates to the choices he's forced to make. Matt King is someone who seems easy to understand and identify with, not the impenetrable personality that most films create solely to keep things moving. His kids, however, they're the ones that need a bit of work.

MINORITY REPORT: I had a brief stint as a sitcom dad, in my heyday. However, at the filming of the second episode the children never showed up. Naturally, as the last person to invite them into my basement, I was asked a lot of questions about it, but they could never prove anything and so the show was cancelled before it even began. - Montague "Legally Sane" Smythe