It's another bumper crop of movies for your weekend's pleasure. It must be the end of Summer or something, what with Percy Jackson: Sea of Monsters, You're Next, The World's End, Kick-Ass 2, The Mortal Instruments: City of Bones and The Spectacular Now all clogging up your multiplex to varying degrees of success.

EXPECTATIONS: Full disclosure: I never saw Percy Jackson and the Olympians: The Lightning Thief. It never occurred to me that that particular Harry Potter wannabe would wind up having legs. While Harry Potter began under Chris Columbus and eventually traded up for directors with a modicum of style, this series immediately traded down for the guy who directed Hotel for Dogs. That said, any movie that tries to get kids interested in Greek mythology can't be all bad. Can it?

REALITY: I don't know many children. I don't have children of my own. It's been a long time since anyone considered me 'children'. So to say that I am out of touch with this generation's crop of kids is kind of like saying grass is green. I don't presume to know what children will or won't enjoy, but I feel pretty confident in stating that if I ever have to teach them about Greek mythology, Percy Jackson: Sea of Monsters is not the film I would use to do it. 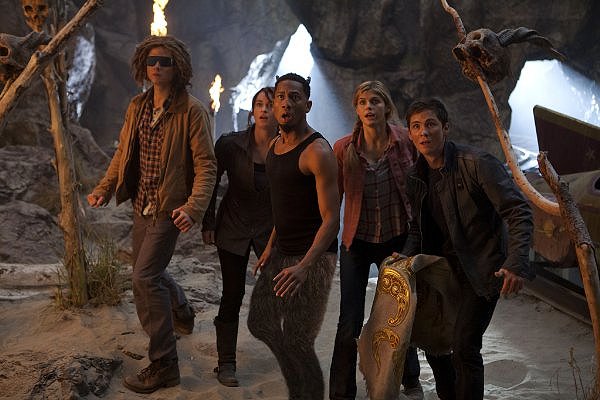 
Having presumably caught and thwarted the first film's titular lightning thief, demigod Percy Jackson (Logan Lerman) is still coming to terms with his role as the son of Poseidon. After an attack on Camp Half-Blood leaves their magical tree dying and their protective barrier broken, Jackson is tasked with a quest into the Sea of Monsters to find the Golden Fleece, which everyone just kind of assumes will heal the tree and repair the barrier. He is joined on his quest by satyr buddy Grover (Brandon T. Jackson), daughter-of-Athena Annabeth (Alexandra Daddario) and newfound cyclops half-brother Tyson (Douglas Smith). They must recover the fleece before Luke (Jake Abel) can use it to resurrect Kronos and thus destroy the world. Because the fate of the world has to be at stake, or else nobody cares.

This is a film that steals and repurposes so many mythical and cinematic elements, seemingly at random, for a generic quest narrative starring smart-aleck PG teenagers that it's hard to find any notes of identity in it at all. 'Unoriginal' isn't the right word, since basing your entire story on Greek myth and Harry Potter is like a creative Get Out Of Jail Free card. 'Uninspired' is more fitting, as even among the threadbare framework of this story, there are a dozen avenues to explore that go completely untouched. For anyone who's already been schooled in the Olympian gods, Sea of Monsters is a colossally boring adventure.

Along the way, the gang encounter all manner of mythical beings and creatures, plucked from Edith Hamilton's Big Book of Myths. The Graeae make an appearance as a trio of wacky taxi drivers. Hermes (Nathan Fillion) shows up as a UPS magnate just long enough to give Percy some magic tools and to remind us all that Fox cancelled Firefly. Then, in one of the film's stranger turns, Percy and his gang are swallowed up by whirlpool monster Charybdis, in whose belly they meet up with fellow demigod Clarisse (Leven Rambin) and her Civil War ironclad piloted by Confederate zombies, because these writers are absolutely terrible at throwing darts at an idea board. 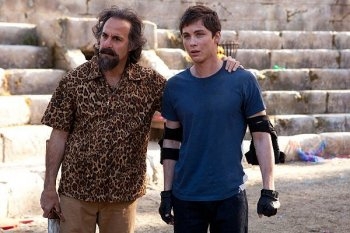 Of course it wouldn't be a movie for teenagers without Stanley Tucci. For some reason this is actually true.

In the title role, Logan Lerman is a completely blank slate of a protagonist. I can't possibly imagine a less interesting hero than his Percy Jackson. It's less the way the character is written, and more the fact that 'mild concern' is Lerman's most extreme facial expression. It's almost as though he's completely confused as to which CGI abomination he's supposed to be reacting to at any given time. He's apparently afflicted with both ADHD and dyslexia, but that character trait intended to endear him to kids the world over only manifests itself when he says he's a dyslexic with ADHD to a character who presumably already knows this.

The lion's share of Sea of Monsters is harmless fluff. If any of the mythological trappings of this film sink into kids' heads and get them to pick up a(ny) book, then it will have succeeded, though trying to reconcile any of the stuff going on with the actual myths is an exercise in madness. It's also less successful when it comes to navigating the politics of race, which are already kind of wonky in a film featuring satyrs, centaurs, shapeshifters and multiple types of cyclops.

Percy's half-brother Tyson is a cyclops, which he explains is the result of a love affair between Poseidon and a sea nymph. This creates a human-sized, Encino Man-esque klutz with one giant eye. This is much different from the giant, hulking race of cyclopes we see lumbering around throughout the film. Tyson, in other words, is a product of genetic inbreeding, one whom most of the film's characters consider weird and icky. Annabeth, especially, has a problem with "his kind," but the film is quick to remind us that this is just good old-fashioned racism and totally not a prejudice against children of mythological incest. Big difference; a difference kids need to be aware of.

The film's one thematic thruline involves Percy being uncertain of his destiny to either save or doom the world. "What if I destroy Olympus by not being good enough to save it," he asks, to which a soul-crushingly sober Dionysus (Stanley Tucci) replies that we'll just have to wait and see. As a product of modernity, Percy ultimately comes around the Sarah Connor school of fate and decides that he can make his own destiny. This points toward a clash between the belief systems of ancient Greece and the God-given free will of Christianity (which is present in the film, as Dionysus envies Jesus for being able to turn water into wine).

Sea of Monsters sidesteps stickier notions like Calvinistic predestination, because kids don't want a freaking theological debate in the middle of their Indiana Jones Meets the Argonauts knockoff. Or at least, I don't think they do. If kids these days are anything like me, all they want is an interesting story told well, with engaging characters and cool special effects. Sadly, Percy Jackson: Sea of Monsters somehow manages to whiff on every single one of those things. Except the CGI hippocamp; that thing was pretty rad.

MINORITY REPORT: I really hope that Nathan Fillion does mention Firefly and you weren't just joking. The best - really the only - gag in the first one was Steve Coogan commenting on how ill-equipped he is to play Hades. If this whole series is full of oddly-cast guest stars referencing their own bizarre casting, then I am all for it. - Martin R. "Vargo" Schneider