EXPECTATIONS: I think my thoughts on Rush can best be summed up with two concise lists. Firstly, here's a list of things associated to Rush that I like: Formula 1 racing; James Hunt; Niki Lauda; Daniel Bruhl. Now, here's the list of things associated with Rush that I'm not so keen on: biopics; Ron Howard; Chris Hemsworth; trying to draw inspiration from a contrived narrative filtered out of the lives and relationships of real people. I'm leaning heavily towards probably not liking this very much.

REALITY: With biopics, there is always the desire to compare the performances and script to the real life events, especially if you have any prior awareness of those events. With Rush primarily interested in the rivalry-cum-friendship of famed racing drivers James Hunt (Hemsworth) and Niki Lauda (Bruhl) through various points in their life, it ultimately lacks any real focus until it spells out its intended message for its audience via mawkish voice-over. What was once an interesting story about two of the sports greatest champions is now reduced to a dick-measuring contest between two arrogant glory-seekers with death wishes. The thing that makes these men interesting is that they were racing drivers and Rush delivers little evidence of why that's worth caring about. 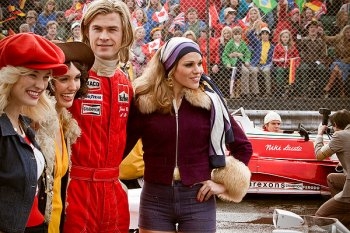 Hunt was so abnormally handsome for a Brit, they had to cast an Australian.Now, I know I'm going against formula here by getting the plot out of the way in the first paragraph, but Rush doesn't really have a plot at all. Instead we have Hunt and Lauda coming up from Formula 3 into Formula 1 as various characters enter and exit their lives with equal rapidity. Then it settles down to focus loosely on the fateful 1976 F1 season wherein the pair battle closely for the championship.

The main contrivance of the film is that the rivalry between these two men is the most meaningful and close relationship of their lives. Hunt's doomed marriage to supermodel Suzy (Olivia Wilde), Lauda's burgeoning romance with the unassuming Marlene (Alexandra Maria Lara), the politics of motorsports, all elements that are entirely incidental to the film's main point of attention. This is one of the main issues to be had with biopics in general; the whittling down of various elements of a human's real life in order to turn them into a metaphor to make a point.

Of course, in real life, Hunt's failed marriage is entirely incidental to either his success as a racing driver or his relationship with Niki Lauda. His off-track activities, the drinking, partying, womanising; maybe they make him appear to be a fascinating figure when you get glimpses of them in the context of his sporting achievements, but in the context of Rush, it would appear that he was a professional drinking, partying womaniser who occasionally raced cars. Lauda comes across as the much more interesting figure, his drive and determination and the strength of will required to survive his horrific injuries are genuinely inspiring.

The way the film juxtaposes the dispositions of these two men is to highlight the charisma and inherent likability of Hunt and cast in a shadow of competitive arrogance, while Lauda's impersonal, single minded, uncharismatic nature is gradually brought into alignment with Hunt. They are both ultimately arrogant and impersonal characters, defined by their relationship to each other. It's okay if you miss that point though, because Rush is extremely heavy-handed in making damn sure you get it. 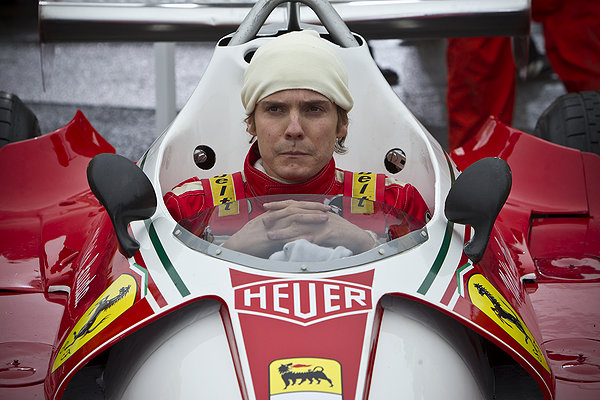 
Throughout the film, there is a persistent comparison being made between racing and sex. Hunt is out shagging every night and day, he's never more than a sideways look and a sly wink away from a sweaty bump and grind in the nearest private area. Meanwhile, Lauda is more interested in driving than knobbing until he meets and falls for Marlene (impressing her with his driving skills of course). Scenes of lovemaking are intercut with scenes of the two men racing each other. The point is that the relationship between Lauda and Hunt is one consummated by symbolic sex. Their rivalry is no different to a love affair. However, you're probably wondering just what the point of that is. Perhaps Ron Howard and screenwriter Peter Morgan felt that the only way to make this story really work was to imply that the chemistry between Lauda and Hunt was a metaphysically romantic one.

Just in case you don't get that, though, Lauda is on hand in the film's final moments to explain it in great detail to Hunt while inserting various mentions of his balls and arsehole, just to make doubly absolutely sure that we get it. Do you get it yet? It's like sex. Sex between heterosexual men. Racing drivers are all symbolically shagging each other. I'm not sure if this is supposed to make motorsports more or less interesting to the uninitiated. I suppose that depends on just how you feel about heterosexual men having non-literal sex with each other and watching that happen every other weekend whilst wearing hats with logos on.

Back in real life, the still living Niki Lauda had famously said to Morgan "Don't make me look gay." Well, rest assured, Niki, this is very blatantly a symbolically sexual relationship between heterosexual men. Besides, nobody involved in the making of this film cares what you want. You are a metaphor now. A boring metaphor. And you look gay.

MINORITY REPORT: I had a feeling your intense hatred for Turbo would carry over to this film. Glad to see Rush has its own set of problems. - Joseph "Jay Dub" Wade