EXPECTATIONS: I'm always happy when a movie comes out of nowhere to nearly-universal acclaim. This film was unknown outside of festivals until about a month ago, and it's from a sophomore director and starring a lot of talented unknowns. That said, Brie Larson is pretty much fantastic in everything she does, so I am pretty content to go into this film blind. Which is good, because that title is not doing any favors for anyone who wants to know what this movie's actually about.

REALITY: Instead of straining for a jokey introductory paragraph in a manner most unfitting for a Comedy Site Film Critic, let me instead turn this introduction into a personal plea. I was not prepared at all for how good this film is, so please bear with me. It's one thing to magically appear and be very good, it's another thing entirely to magically appear and be one of the best films of the year. It is a film so good it reminds us why we love films. 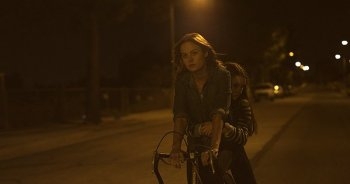 Grand Theft Auto VShort Term 12 refers to the film's primary setting, a state-run safety facility for abandoned or unwanted youths or wards of the state that are between foster homes. This facility is managed by Grace (Larson) alongside her not-so-secret boyfriend Mason (John Gallagher Jr.) Together with night-shift leader Jessica (Stephanie Beatriz) and clueless newbie Nate (Rami Malek), the team tries to provide a safe haven for troubled youth, who aren't making their jobs any easier. Confronted with problems from her own childhood, Grace finds herself especially drawn to Jayden (Kaitlyn Dever). an angry young girl who has been semi-disowned by an influential father that Grace suspects is abusing her.

This is a scenario that lends itself very easily to melodrama, and so the film combats that tendency with a liberal helping of honesty and realism. Director Destin Cretton plays this film close to the chest, both figuratively and literally. His intense never-flinching closeups of these expressive faces give the film a sense of intimacy rarely felt on screen today. Yes, it is very common to use handheld camerawork and documentary-style filmmaking (not to be confused with found footage) as an aesthetic, but normally this has the opposite effect: By making you hyper-aware that there is a camera actively trying to look real, it actually lessens the cinematic impact. This is not the case with Short Term 12. Here the handheld work combined with the strong performance puts you right there, sitting on the bed next to Marcus (Keith Stanfield) as he raps about his abusive mother. In fact, it's helpful because a kid rapping about his past on screen should be cringeworthy, but it's not: It's heartfelt and powerful.

Most of this film's power comes from its gift for subtlety. Many films approach youth issues like abuse and self-harm with the tactfulness of a Lifetime original movie and it's very easy to see why you would do this: Because inner conflict is very difficult to film and make look interesting. But there's enough intellect in this script that it is willing to let us ask questions, be drawn in by the story, and remain curious. It also has the decency to reward us for our patience. Just like when you see someone who is very upset, you don't fully know why they are, but you know that they are, and that's enough. Then, when you find out everything, that emotional weight hits you even harder because you realize fully how little you knew before. 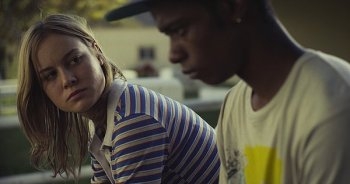 What do you mean you haven't played it yet?Of course, none of this would be possible if not for the incredible performances from Brie Larson and the rest of the cast. Larson's performance is nothing short of a revelation. She possesses this incredible range of emotion that she can express with only her face, and also can switch it instantaneously. She can go from confused and bewildered to flat-out terrifying and back in a second, which is helpful when she's trying to portray emotions and issues that aren't immediately obvious to everyone watching. The younger actors all put in startlingly good turns as well, especially Stanfield, who has a mastery of teen male ego, playing the angry young man with just enough fear breaking through.

In fact, while the movie's most direct conflict is primarily about the relationship between two young women, it also has some things to say about the concept of masculinity. John Gallagher Jr. plays Mason with a great deal of sensitivity and at no point is he made to look like less of a man for it. When he and Grace hit a lull in their sex life, he doesn't complain (directly) about the lack of sex, he tries to figure out what is wrong and help her work through it. He even makes a point of establishing consent with her even though they've been together for a while because he knows of her trust issues. He actively tries to understand the problems faced by Grace and the kids in the facility, even when there's no way he can relate to them. In that same vein, Marcus uses his position of authority over the other kids in Short Term 12 to make sure that Jayden feels welcome, with no reward expected or presented. This is a film that presents empathy as an indication not just of humanity, but of manliness, and that's refreshing to see.

This refusal to be afraid of intimacy isn't just a tendency that the characters have, it's a trait that pervades throughout the entire film. Short Term 12 wears its heart on its sleeve, and I love it for that. The intelligent aesthetic style and sensibility of the script combined with the brilliant and earnest performances give you no choice but to care for all of these characters. Short Term 12 deserves your money and your attention, it is the kind of movie that needs to be successful just so that hopefully we have more films stealing lessons from it.

MINORITY REPORT: Finally, someone who isn't me is giving out perfect scores. I'm starting to look like the crazy one over here. - Ian "Professor Clumsy" Maddison