It is January. Cinematically speaking, it's like a month of dead air. At least, that usually seems to be the case. We do have some rather interesting little films on the docket this week, though. We have Paranormal Activity: The Marked Ones, which finally wins Ian "Professor Clumsy" Maddison over to the defunct franchise. Sean "Keanu Grieves" Hanson plays the odds against war movie Lone Survivor. The Legend of Hercules leaves Joseph "Jay Dub" Wade confused and frightened. Martin R. "Vargo" Schneider is knocked on his ass by Grudge Match.

Paranormal Activity: The Marked Ones

EXPECTATIONS: I can scarcely believe that they made another one of these. My disbelief is pushed further still by the fact that I had no idea this thing had even been produced and released until someone asked me if I'd seen it. If only that person had never been born, my ignorance would possibly have continued up until my eventual death by murder.

REALITY: If you read my review of the previous Paranormal Activity movie, you'll remember a strange confusion about the direction of the franchise. Somewhere along the way, under the guidance of writer/director Chris Landon, the Paranormal Activity property has traded in the genre's trademark pop scares and haunted house scenarios for well-observed character comedy and nonsensical plot contrivances. The jump from horror to comedy may be dismissed by some as being unintentional, but Paranormal Activity: The Marked Ones continues ably in the same vein and proves that they're really intent on taking the series in this new direction. The strangest part is how well it works. 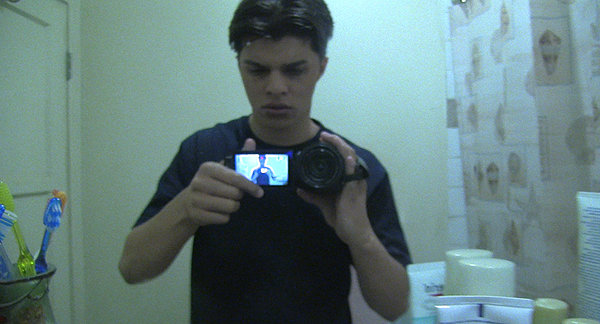 A man looks at his reflection in a mirror through a camcorder's view-finder. The modern times have been distilled into a single image.


This time around, the camcorder-happy leads are Jesse (Andrew Jacobs) and his best friend, Hector (Jorge Diaz). Recently graduated from high school, this pair of braying jackasses waste their summer in their small apartment complex in a HispanicHispanic community in California, filming themselves playing pranks on each other and generally killing time doing nothing. One day, they happen to catch their friend Oscar (Carlos Pratts) fleeing the scene of a murder he committed. Deciding to investigate the crime scene themselves, Jesse and Hector come away with even more questions and Jesse gets himself possessed by a demon for his trouble. They enlist the help of Hector's sister Marisol (Gabrielle Walsh) to get to the bottom of this.

What surprised me about The Marked Ones was how much humour it managed to squeeze out of its central situation. Obviously, retreading the same ground as the first film over and over just isn't going to cut it. Pop scares lose their effectiveness when you know they're coming and there's only so much suspense you can draw out of a Ouija board before people start yawning, so let's try and get some laughs out of it instead. In place of a Ouija board, The Marked Ones has Jesse talking to an old Simon toy, which responds to his yes or no questions with a coloured light and a corresponding boop. The situation is fundamentally the same: unnatural forces communicating to the ignorant through the medium of children's toys. Changing the toy merely heightens the absurdity.

The entire film seems to have been built on the concept of heightened absurdity. When Jesse is first possessed, he assumes what I imagine most modern teenagers would assume, which is that he's Spider-Man. There are numerous scenes of Jesse falling backwards and being caught by an invisible force. They even put it on YouTube and get multiple comments on how fake it must be. On top of that, he can blow up an airbed with a single puff of air, he can perform impossible skateboard tricks for the amusement of his friends and he can waylay would-be muggers with a gentle slap. He has all the best superpowers a teenager in California could possibly have. 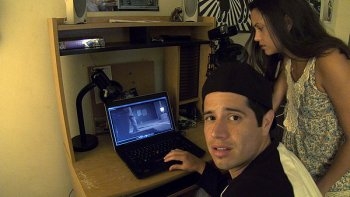 Lowtax finishes up his Cry of Fear Let's Play finally.Of course, it all goes horribly wrong for poor Jesse as the demon inside him starts to wreak havoc. Maybe havoc is the wrong word. It starts to wreak mischief. Even in what would normally read as the most troubling moments of Jesse's transformation, the absurdity is ramped up to hilarious proportions. What The Marked Ones does best is to build effective scenes of comedy out of the audience's expectation of it being a horror movie. Sequences wherein a scare seems telegraphed let the audience know to expect something, when that thing is delivered the scene continues and builds into humour.

Take, for example, a scene in which Jesse is about to engage in an act of carnal knowledge only to find himself woefully lacking in prophylactic devices, prompting him to run out urgently. Left alone, we know that something will happen to his intended sexual partner. When the obvious expected thing does happen and she flees, Jesse returns, condom in hand, ready to get busy. That's the kind of simple yet amusing scenario that this film is full of and I think one that defines the humourous new direction of the Paranormal Activity series.

Jesse and Hector, along with the rest of the cast, are extremely likeable and compelling characters, for the first time in the franchise's history. Andrew Jacobs and Jorge Diaz are the kind of excellently naturalistic actors that found footage films need. Diaz, especially, carries a lot of the film's funniest moments single-handedly.

Unfortunately, The Marked Ones severely collapses under the weight of its own plot in the third act. Instead of rolling gently to an amusing halt, the film descends into absolute nonsense and a denouement that I defy anybody to get their heads around, especially when much more climactic scenes already took place. Paranormal Activity: The Marked Ones could really have ended twenty minutes earlier. Would anyone have minded if this film was only 60 minutes long? Sherlock Holmes and the Voice of Terror (1942) was only 65 minutes. Winnie the Pooh (2011) was only 63. Those are great films that people care about, right? This could have been one of those too.

MINORITY REPORT: After his year-end essay, I was worried Ian couldn't appreciate a film that wasn't about dicks. He proved me wrong. Unfortunately, in doing so, he expressed affection for a Paranormal Activity sequel that's not Paranormal Activity 2. My own dick is more than confused. - Sean "Keanu Grieves" Hanson