EXPECTATIONS: The Damned does not look propitious. It actually took me a while to find anything on the film, since IMDb lists another film called The Damned (2014) that stars Danny Trejo as a professional forgiver of some sort. Our subject doesn't have a Wikipedia page or a fully fleshed-out IMDb page (IMDb calls it Gallows Hill), it went straight to Amazon Instant Video, and it stars the guy who appeared in Twilight as Dr. Moneybags von Dracula Sr. Its plot has a setup that strongly resembles The Rocky Horror Picture Show ... but, you know, serious. All of this adds up to a vague premonition that nobody cares if anybody who ever sees this movie likes it ... or sees it. 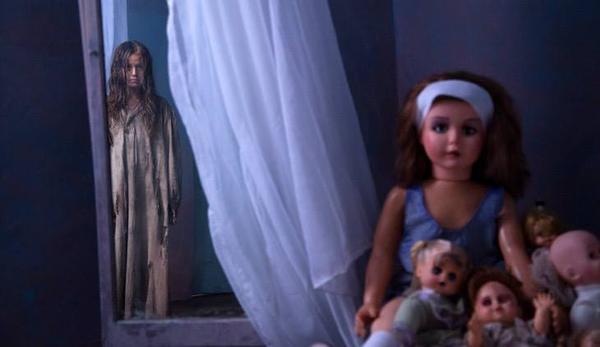 Anyway, let's back up a bit. The Damned tries to tell a story about guilt. Peter Facinelli, of Twilight fame, plays David, an affluent widower who struggles to deal with the death of his wife, Marcela. These feelings persist even as he gets ready to marry Lauren (Sophia Myles), his fiancée, who only ever shows us one distinctive personality trait: "British." The pair flies down to Bogotá to talk David's recalcitrant daughter Jill (Nathalia Ramos) into attending the wedding (and to serve as the white non-hispanophones that American audiences apparently require). Of course, one can't have a mediocre horror movie without a surfeit of febrile bickering, so David's opportunistic quondam sister-in-law Gina (Carolina Guerra) and Jill's faux-macho boyfriend Ramon (Sebastian Martínez) tag along as bickering fodder.

The standard crash-car-in-rain-hide-in-creepy-house routine ensues, this time landing in a long-shuttered hotel occupied by Felipe (Gustavo Anagarita), a gruff recluse. Our heroes gradually discover the presence of his daughter, Ana Maria (Julieta Salazar), and then the standard no-electricity/isolated-location horror movie shit goes down. 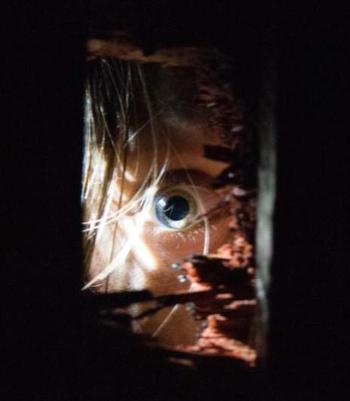 This dude is high as fuck.The entire film reeks of missed opportunities. Instead of using the central "you kill me and I become you" gimmick to open new avenues of storytelling, screenwriter Richard D'Ovidio makes a beeline for the clichés. The Exorcist, Suspiria, The Thing, Solaris, The Blair Witch Project, even ParaNorman ... all have plot points ripped straight out and fitted into this movie's wildly inconsistent script, with nothing new brought to the table. Hey, I get it. I've heard the old writers' aphorism: "When you steal, steal from the best." But that doesn't mean you write a movie the same way you make a ransom note. Demonic children scared us in the '70s. Possession-horror scared us in the '80s. Dead witch spirits scared us in the '90s. You have to do better than that to make something memorable all these years later.

In stealing bricks of plot from other films, D'Ovidio forgets to set the mortar of character development. The film sets up a motif of duality between David's family and Felipe's, but the latter family doesn't get enough screen-time to establish a meaningful, insightful parallel. Jill alternates between hating, loving, and needing her father, but their conflicts never meet with an actual resolution. In fact, we seldom even see the catalysts. The rest of the time, Jill hand-waves it away like, "Hey, remember when I hated you five minutes ago? Crazy, huh?" Two infidelity-related subplots go nowhere. Characters repeatedly have their past actions shoved into their faces, but none show any outward signs of remorse or a change of attitude.

Unfortunately, while D'Ovidio copies the beats of better movies, director Víctor García doesn't seem to want to attempt to copy their styles, or use any style. Aside from an abundance of close-ups and medium shots, he doesn't seem to have a plan aside from "point camera ’ wait until words stop ’ cut." Even the abundance of blood loses a lot in the face of such anodyne direction. The film doesn't pick up any momentum to speak of until the second half, and even then the overall situation remains unchanged for long stretches, with set pieces few, far between, and flaccid. García has potential, but he lacks ambition. This film feels more like a master study or a practice sketch than a finished piece, more like a rehearsal than a concert, more like a sunburn-slapper than a serial killer. I hope the future gives García more chances to step up to the plate and do more than just get by, because he undoubtedly deserves better than to leave this as his legacy.

While I can easily call the film beige or listless, I can't call it entirely unwatchable. That only makes it worse. Having negative memories of this film would almost feel preferable to the way the rains of my forgetfulness have eroded my memory of this film down into naught but an abject envy toward Ashley for getting to review that LSD-trip Lucy. I suppose this movie has a possible use as a starter film for the horror neophyte. But I can't fathom why the world would possibly need a Final Fantasy Mystic Quest of horror.

MINORITY REPORT: I've been saying for years that the premise for The Santa Clause was ripe for a horror spinoff. Is Tim Allen available? I think he might want to get in on the sequel. - Joseph "Jay Dub" Wade