EXPECTATIONS: When I first saw the trailer for Lucy, my friend and I exchanged looks and started laughing. The ridiculous "you only use ten percent of your brain" myth, that having access to more of your brain apparently gives you psychic powers, her immediate execution of a dude purely because he doesn't speak English ... there's nothing here that isn't hilariously terrible. Writer/director Luc Besson (remember The Fifth Element?) has described this film as a "philosophical thriller," which sounds exactly like the kind of shit my most pretentious college boyfriend would have been into (he loved Donnie Darko). It'll be some violent weird BS, probably.

REALITY: What the fuck.

I'll lay out the premise for you, though you probably already know it: The titular Lucy (Scarlett Johansson) is forcibly made into a drug mule. Some kidnappers beat the shit out of her, which breaks the drug bag open and dumps the drug into her system. This makes her into a psychic wizard out to kill a bunch of people for reasons. Because this experience is kind of terrible, she seeks out an expert(?) on the topic, Professor Norman (Morgan Freeman).

It's made clear early on that Besson wants to make a point about nature, evolution, and the potential of humanity. He lets us know this by cutting in footage of wild animals and gelatinous CGI mitosis to parallel the events surrounding Lucy.

Besson also really wants you to know that he's totally thought about this, as the film goes out of its way to point out that the main character is named Lucy, just like a skeleton found of "the first woman." This is close-but-not-true, as Lucy-the-skeleton is actually an Australopithecus afarensis, and not a Homo sapien. This may seem semantic to you, but this is just the first of every "scientific fact" they reference in the film that turns out to be inaccurate. This film has a ten-year-old's understanding of biology.

I have no trouble accepting magic or totally off-the-wall crazy bullshit in my science-fiction films, particularly if it is in service of a theme. I can suspend my disbelief pretty damn hard, but the movie actively kept trying to ground itself in actual science, which would have been apt if they didn't fuck up the most basic of scientific facts repeatedly. At one point, Lucy says she needs to "force her cells to split open," which is a phrase basically devoid of all meaning in this context. Look, if you want to have a story about the potential of humanity via becoming a space wizard, baller, do it, but let's not pretend it's because of a hormone ladies make when they're growing tiny humans in the uterus. I understand it's trying to make an explicit connection to evolution (as well as make an oddly specific commentary about women I'm not sure I'm comfortable with?), but there's so much garbage pseudoscience at work here I might as well be reading an L. Ron Hubbard novel. Past a certain point, why try to repeatedly root it in real science if you're just going to go full-on crazy? 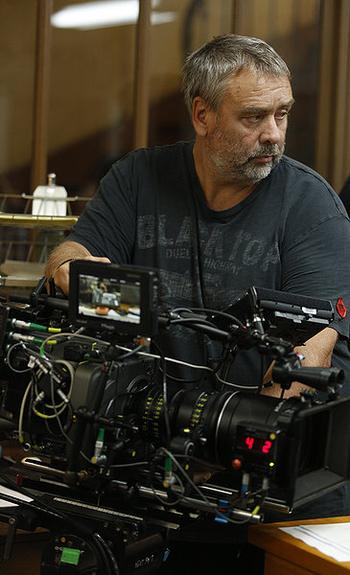 SOMETHING AWFUL BEHIND THE SCENES EXCLUSIVE: Filming was postponed until this guy learned how to use 100% of this camera.All of this pales in comparison to how totally batshit the "philosophical" angle seems to be. Despite the fact that the purpose and potential of humanity has been a point of philosophical thought for centuries, Besson decides to ignore all of that in favor of stating some vague notions about the biological purpose of life (in scientifically inaccurate terms) and how TIME IS ALL THAT IS, even though time is just a perception, and for a being on Lucy's level, it might as well not exist at all. As the movie reaches its climax, it references both The Lawnmower Man and a little painting called "The Creation of Adam" in some of the most hilariously unsubtle imagery I think I've ever seen, along with what I think is supposed to be a representation of abiogenesis. The film is trying to juggle so much deep philosophy and action sequences throughout that the final message is muddled and laughable.

Those action sequences, though? A lot of fun. As Lucy's "access to her cranial capacity" increases, she becomes steadily more powerful and sociopathic. She blows through her surprisingly determined adversaries like a juggernaut, flinging them aside like ragdolls or introducing them to bullets, with absolutely no shits given for the safety of bystanders. A lot of the tension of these scenes is lost because Lucy is so invincible, but purely as a spectacle, it's satisfying to watch her destroy everything in her path. Lucy is not a person; she's a force of nature.

Not that she doesn't start out as a person; she starts out as a sympathetic and likable woman, who reacts like someone scared and naïve would at the onset of something frightening. As the film progresses, by her own admission, she becomes more inhuman. ScarJo's performance becomes increasingly robotic, with a few odd moments of humanity, and she sells it. Even with as ludicrous as the film gets at times, Johansson plays it to the hilt. It will surprise no one who has seen her act before to hear that she's great here.

The philosophical point of Lucy, which has several possible readings (all of which are equally ridiculous), gets lost in the whirling colors and crazy events. There are a lot of deliberately uncomfortable moments shoehorned in, and the film feels incredibly pretentious. It trips itself up trying to bring real science into its space-time magic. But, you know what? I had fun. I had fun watching this weird combination of existential crisis and acid trip.

I'll leave you with my immediate response to the film, which a movie theater employee told me to put in my review:

"That movie was balls insane."

MINORITY REPORT: Sadly, it seems as if all of the premises to ScarJo's recent movies were cooked up in a freshman philosophy class: Wouldn't it be cool if, like, a man fell in love with Siri? Wouldn't it be cool if we saw humanity, man, but, like, from an alien's perspective? You know, man, Joss Whedon has all these thoughts about women and, like, wouldn't it be great if he made a superhero movie that totally broke the mold? - Sean "Keanu Grieves" Hanson