EXPECTATIONS: Honestly, I don't know quite what to expect out of Your Sister's Sister. We've mentioned before our hope to see the mumblecore genre grow beyond a stupid name for films with half-performed characters, and this film looks like another step in the right direction. On top of that, it features a pair of actresses I've come to admire (even if one of them did make an appearance in last week's unfortunate The Watch). As far as I can tell, there is no reason to expect anything less than a perfectly enjoyable night at the movies, something that has been in disturbingly short supply this summer.

REALITY: In the hands of a conventional Hollywood director, Your Sister's Sister might have become a cloying melodrama featuring insufferable characters making any number of equally irrational choices, and one of us might have wound up diagramming all the reasons why Emily Blunt's character is a horrible person. Fortunately, that's not the film director Lynn Shelton has delivered. Your Sister's Sister isn't without its share of melodrama, but it's accompanied by first-rate performances, some well-earned laughs, and characters so carefully drawn that their irrational choices at least make sense to us. 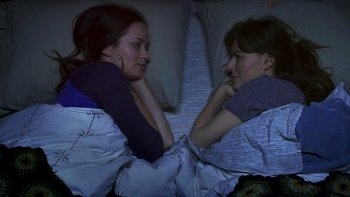 I'm sorry if this isn't exactly how you imagined this scenario.The film opens at a memorial gathering for Tom, whose death one year ago still weighs heavily on his brother Jack (Mark Duplass). After Jack delivers a particularly destructive eulogy, his best friend Iris (Emily Blunt) suggests he take a week off and stay at her father's cabin on the coast of Washington. When he arrives, he unexpectedly meets Iris' sister Hannah (Rosemarie DeWitt), who herself just arrived after ending a seven-year relationship with her girlfriend. The two get to know each other over drinks, eventually leading to sex, and then an awkward morning encounter with Iris, who has arrived to bring Jack groceries.

How long Jack and Hannah can keep their secret from Iris, and whether they even should, fuels much of the film's plot, and turns what easily could have been another plodding exercise in improvisation into a film about how sacred the delicate bonds between family and friends truly are. That may be a pretentious sort of way to word it, but that's what lies at the heart of Your Sister's Sister. Even the title refers to the way we relate to each other in terms of the other people in our lives; at one point Jack delivers an impromptu toast to Hannah: "Here's to your sister, and your sister's sister!" He could just as easily have said "Here's to you," but I guess drinking is the enemy of brevity.

In a nutshell, that seems like a perfect way to describe Jack's character even when sober; he's direct without actually being direct. At his brother's memorial, Jack watches as comedian Mike Birbiglia tells a story of Tom's altruism after seeing the film Hotel Rwanda. This doesn't sit right with Jack, who then tells a similar story about how Tom's altruism was actually a calculated decision after having seen the film Revenge of the Nerds and realizing what a bully he'd been in high school. Jack has a way of saying precisely what he's thinking, but in a way that dances around direct statements and invective language. It's endearing at first, but it's a behavior that Jack has to learn to let go of if he ever hopes to grow as a person. Chalk it up to Mark Duplass, whose comic timing and slack demeanor work wonders in turning Jack into the sort of asshole we actually want to care about. 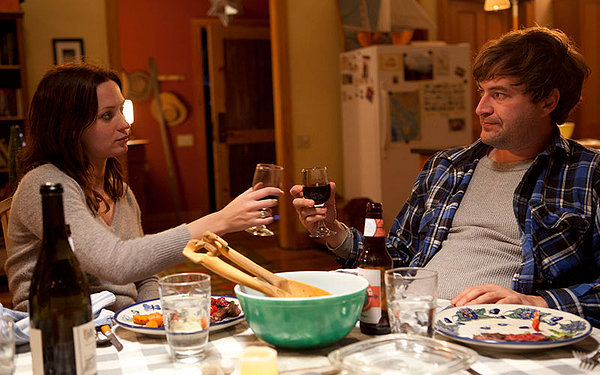 As good as Duplass is in the role, he simply can't overshadow Emily Blunt and Rosemarie DeWitt who, as a pair, are just about perfect. Emily Blunt, especially, turns Iris into a character who has nothing but doe-eyed admiration for her big sister. It's that admiration that anchors the film, and the same tie that Jack's presence later threatens to sever. Much of the film's dialogue is improvised, and the quiet scenes between Iris and Hannah are the film's highlights. Even after Jack asks that the three of them please not talk behind each other's backs, these brief moments between two sisters do an incredible amount of narrative footwork in getting us up to speed on these characters and their relation to Jack. (Incidentally, Your Sister's Sister manages to fail the Bechdel Test with flying colors).

As things come to a head in the third act, the secrets that are revealed feel oddly manufactured, almost as though they were the only parts of the script that had been written down in the first place. Granted, the inevitable reveal that Hannah and Jack slept together is hardly the point, and neither are the other secrets we come to discover. What matters is how these secrets affect Hannah, Iris and Jack, and the damage it does to their relationships. The tension between Hannah and Iris is especially hard on Jack, as he knows what it's like to lose that bond with a sibling, and it pains him immensely to be the one doing it to his best friend.

While the ending somehow manages to wrap things up in incredibly abrupt fashion, the personal journeys these characters take to get there are what keep us watching. Your Sister's Sister is a romantic comedy that jettisons much of the typical rom-com fluff for something a little more natural, and in doing so makes for a film that is remarkably steady. Director Lynn Shelton (who previously directed Mark Duplass in Humpday) knows what lies at the core of these stories, and she strips away all the extraneous parts, leaving us with three characters, their feelings and their grievances. If the future of the dramedy means doing away with things like pointless back-stories and comic-relief characters, then that's a future I think we're ready for.