EXPECTATIONS: The words "based on a true story" are somewhat of a joke in the movie business, because the true story upon which these films are based is normally something along the lines of "Some people went to a place and did a thing. MAAAYYYBEEE it looked like this?" This is why I find the opening credits to Bernie so fascinating. The entire story is based on an article from 1998 written by Skip Hollandsworth, and who's credited along with director Richard Linklater for writing the screenplay? Skip Hollandsworth. (Side note: "Skip Hollandsworth" sounds like the name of a local news weatherman.) This means that the "actual events" the film is based on might actually, in actuality, be actual events. Actually.

REALITY: Jack Black is one of those actors whose best work is so good, I can forgive him of his trespasses. His many, many, trespasses. Sometimes I wonder if Black has reached the "Steve Martin" point in his career where he doesn't even care about movies anymore, he just takes a bit here and there to pay for more art and banjos. However, Martin spent many good years getting to that stage, and Black has been in it for a good third of his career. This is why I'm always so glad when a role like Bernie or Margot at the Wedding pops up where Black can put away his faux-rock-star rigg-a-gigga-gigga-goo schtick and be an actor. He disappears completely into this role, and that makes this already good film even better. 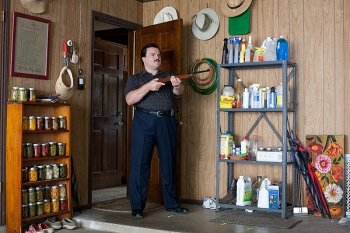 It's an action movie, see?Black plays Bernie Tiede, a beloved funeral director in a small Texas town who strikes up a bizarre friendship with the meanest, richest, most hated old woman in town, Marjorie Nugent (The great Shirley MacLaine). After several years of Marjorie becoming more and more abusive, the normally passive Bernie finally snaps and kills her with what I thought was a BB gun up until that point. Seriously, there's not even blood or bullet wounds, presumably because the scene is from Bernie's point of view and he would mentally block those things out, but for a while I thought the twist was going to be that she died of a heart attack and Bernie took responsibility for nothing. Anyway, Bernie manages to keep Marjorie's death a secret for nine whole months because no one is looking for her, and in that time, he spends Marjorie's money on everyone in town but himself.

Director Richard Linklater knows how to get good performances out of his actors. The last time he worked with Jack Black, he managed to hang a lampshade on Black's garage-band persona in School of Rock. Here, he does something clever to prevent the possibility of Jack Black overexposure: He minimizes Black's screen time. The first half of the movie is filmed in a way that I'm having trouble describing. It's like a mockumentary, but because this actually happened, and some of the people in the film are actual townsfolk from the real-life story, it doesn't quite live up to the "mock" part. It's like a documentary where the subject is played by a professional actor. The closest thing I can compare it to is those dramatizations of emergencies and crimes you used to see in shows like Rescue 911.

As a result, a great deal of the film is people talking about Bernie, and what's amazing is that this technique actually exposes information about our title character, and about the setting of the movie at the same time. Linklater's script captures the vernacular of small-town gossip so well that anyone who has ever set foot in a church will recognize these people in their own life. The town of Carthage, Texas has a mentality all its own, and the conflict between the way these people view things and the way the world does is at the heart of the film. It's kind of like an extended episode of King of the Hill, in which someone finally up and shoots Peggy. 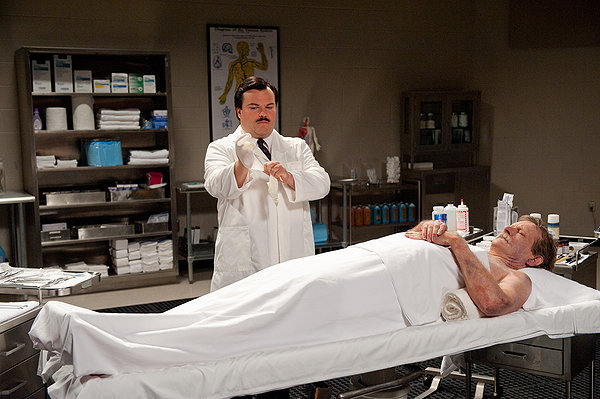 And this is the point at which it got weird.

There's so much going on in this film I'm not even sure where to start. There's a commentary on small-town mentality that toes, but doesn't cross, the line of being judgmental. There's also a massive church-vs-state issue creeping in, and a Law and Order-esque reworking of the legal system. This is where Matthew McConaughey comes in, playing the District Attorney in charge of prosecuting Bernie. McConaughey is really at his best while playing an attorney, mostly owing to the combination of charm and sleaze Linklater tapped into so brilliantly with Dazed and Confused. There's just something about him that's so... litigious. (Litigory? Litigationary? I like that one. Let's go with "Litigationary." Words are fun!) The film even seems to be shot better when it morphs into courtroom drama toward the end, because when you put McConaughey in that setting, good things just happen. The movie is a dark-comedy-docu/mockumentary-courtroom film, and I'm pretty sure I missed a hyphenate in there.

This review is getting complicated, and I haven't even touched on the film's discussion of Bernie's sexuality yet. (Bernie is very heavily implied to be gay, and right at the moment you're asking "Why doesn't anyone think this?" the words "IS BERNIE GAY?" flash on the screen. Also, Bernie is a bit of a stereotype, but Black's performance is so good and sexual orientation is so understated in this film it doesn't matter.) Bernie is a film that has so many balls in the air that the pacing can suffer. For example, way too much time feels like it's spent on developing the Harold and Maude relationship between Bernie and Marjorie, but that makes the payoff a little better. It's a film that works because it allows everyone involved to do what they do best, while still being controlled. Jack Black gets to sing and dance and throw out a shoutout to Kyle Gass, but with Linklater's direction, you don't ever see Jack Black in any of this. You see 100% Bernie Tiede.


Bernie probably requires a second viewing to fully process, and luckily, it's also entertaining enough to deserve it. It's a story that dances around morality in a challenging way. Bernie is a good person, but he's still a murderer. Marjorie is a bad person, but she's still the victim. DA Danny Buck is completely in the right (except in terms of legal semantics) but he's still a douchebag. Few films even attempt to carry more than one theme, and there's at least a half-dozen interpretations to be found here. Between this, last week's Safety Not Guaranteed, and 21 Jump Street, we're in the middle of a rainstorm of smart comedies. Of course, we also just found out that according to the prestigious Sight & Sound critics poll (which we here at Current Releases were not asked to be a part of, and are in no way bitter about it) apparently a comedy can't be a great movie. So I guess we're all wasting our time.

MINORITY REPORT: What this film needs is a dance craze to sweep the nation. Don't laugh. If the Weekend at Bernie's sequel can have one, this one can too. - Joseph "Jay Dub" Wade

Did you guys just mention "dance craze" and Steve Martin in the same review? Get 'em, Steve, get 'em! - garbage day