The Santa Clause: A trilogy, a legacy, etched onto our minds forever 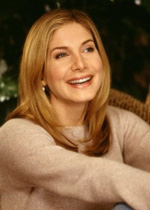 Sadly, Elizabeth Mitchell, star of Santa Clause 2 and 3, would never again find a quality outlet for her talents.Every year, Hollywood studios trot out their latest and greatest blockbusters; movies about exploding superheroes, gay robots and racist talking animals. Whatever happened to the family-friendly franchises? The ones mom and dad could take the youngsters to without feeling like they had to take the whole clan to confessional afterward? Films like those of the Santa Clause trilogy just don't exist anymore.

The Santa Clause, the 1994 original, is a wonderful holiday film about Scott Calvin, a divorced toy executive (Tim "The Toolman" Taylor), who accidentally assumes the identity of Kris Kringle after the jolly old elf falls off his roof. Egged on by his son, who tragically believes anything anyone tells him, Scott warms to the idea of being the eternal symbol of Christmas. With the help of his son and the North Pole's plucky band of thousand-year-old toddlers, Scott rises above the oppressive forces of child custody papers and Judge Reinhold to become the One True Santa.

The Santa Clause is definitely worthy of becoming a Christmas tradition. Thankfully, children dragged their parents out to see the film in droves, helping it gross nearly $200 million. After an inexplicable eight-year absence, 2002's The Santa Clause 2 announced that Disney finally deemed the sublime film worth of franchisehood. This long-awaited sequel brought back nearly the entire cast and elevated the series from a massively entertaining Christmas movie to an absolutely pitch-perfect fantasy blowout.

The sequel finds Scott at the threshold of yet another Christmas when he discovers two dire problems. The first: The dual revelations that his son landed on the Naughty List for being a pro-Christmas eco-terrorist, andd that apparently not even Santa has any control over who gets put on the Naughty List. The second: A heretofore unnoticed clause in the Santa contract stipulates that if a given Santa Claus happens to be unattached, he has until his ninth go-round to find himself a missus. Also, there's something about a toy clone of Santa Claus threatening to turn his workshop into a communist labor camp, but who cares about political allegory in a Christmas film? Nine-year-olds, that's who! 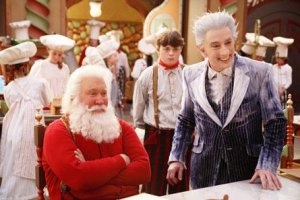 Tim Allen and Martin Short. Now there's a comedic duo that remains unmatched.Douchebag cynics might suggest this film is little more than a greedy cash grab on Disney's part. However, I've got a bit more faith in my media juggernauts than most people. I doubt money was entirely the reason they decided to make this sequel. The way I see it, the suits at Disney just couldn't stand to have their St. Nick be a jolly old bachelor. It stuck in their craw that he was still single at the end of the first film. They wanted him to have an old lady in order to maintain the "family-friendly" image of which they're so protective. Enter "The Mrs. Clause", a caveat which would call for an entire second film consisting largely of rom-com cliches in order for their beloved Santa Claus to find a wife and close out his story with something resembling dignity.

True to his character as a smarmy jerkface, Scott consistently neglects the written contract that he never actually signed way back in the first film. This not only brings him a world of trouble, but also provides the basis for a third film to round out this yuletide trilogy. 2006's The Santa Clause 3: The Escape Clause ups the ante by pitting Scott/Santa against Martin Short, who's infiltrated the League of Fake Characters under the guise of Jack Frost. Frost is sick of playing seventh fiddle to Santa Claus, The Easter Bunny, The Tooth Fairy, Father Time, Mother Nature, and The Sandman. His plan is to invoke another as-yet-unheard-of portion of the Santa contract in order to steal the position away from Scott and lord over Christmas like the cold-hearted bastard he clearly is.

This "Escape Clause" sends both men back in time to the events of the first film: Frost takes Santa's place instead of Scott, and Scott returns to the present day, where he's a depressed, divorced toy hustler. In the meantime, Jack Frost has turned the North Pole into a Disney-esque theme park, and Scott must hop the next flight to the top of the world and undo all that evil garbage I just typed. The lesson here is that being Santa Claus is the greatest thing ever, or at least second only to having a beautiful wife, a loving family, and a cool mansion in the snowiest place on Earth.

Ultimately, the Santa Clause trilogy is all about family and the discovering thereof. While the original film is completely flawless in every way, the sequels are really where this holiday series starts to shine. The childlike sense of wonder, the Christmas-y aesthetic, the Toyetic character designs; everything about the sequels is bigger and better than the original film. Whereas the first film centered around the tragic and potentially scarring experience of a family crumbling to pieces, the sequels maintained a suitably uplifting tone that any family could support wholeheartedly! Mine certainly did, and if yours don't, then you should all be lined up against a wall and shot.