If you don't know the difference between creepy and delightful, then you haven't seen Santa Claus.

Santa Claus follows jolly ol' Saint Nick as he goes through his rounds one Christmas Eve, delivering toys to good boys and girls all over the world (that head count is roughly six, given how many houses we see him visit). However, not all is calm and bright for Santa this night, because his greatest nemesis is afoot to sabotage his cheer-and-goodwill-spreading mission, and that enemy is none other than Lucifer. It turns out the Prince of Darkness is so preoccupied with keeping brutal dictators in power that he doesn't have time to stifle Santa himself, so he sends his minion, a demon named Pitch, to put the old man's plans on ice, so to speak. 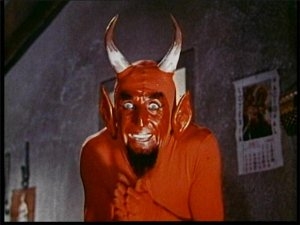 Delight your children with silly Satanic hijinks this Christmas.Pitch is the last thing on Santa's mind, though. He's far too busy getting ready for Christmas in his gigantic fortress in outer space, where the world's pesky child labor laws are null and void. Santa, it seems, got rid of his elves a long time ago and replaced them with children, and rightfully so. Nothing says unchecked capitalism like Christmas time, and what kind of savior of the free market would Santa be with worker unions jacking up his operation? Santa's quite the equal opportunity exploiter, employing children from all over the world: India, Japan, Germany, Brazil, the United States. There's even a bit where he introduces the children from Africa, complete with a sequence where they dance around in loincloths, banging on drums and shouting "Ooga Booga!" It was nice enough that Cardona went out of his way to include all races, but I was especially thrilled with his decision to do so in classy Friz Freleng fashion.

Santa pays special attention to two non-employee children: Billy, who comes from a wealthy family, and Lupita, who comes from a family so poor I was surprised she wasn't working in Santa's sweatshop. Santa learns of Billy and Lupita using his various means of global surveillance, which include a telescope that enables him to see anywhere in the world, a device that allows him to peer into people's dreams and an all-knowing machine called the Teletalker, which looks like a pinball machine with a set of enormous moving red lips attached to its front. When I first saw the Teletalker, I thought the mouth was a giant talking baboon's anus, an image that predates similar scenes from Naked Lunch by more than thirty years! Truly this picture is ahead of its time.

Despite his arsenal of high-tech gadgets, Santa still enjoys ye-olde diversions, like reading letters from children. I particularly liked watching Santa read the letter about the kid who wants a little brother for Christmas with an inscrutable "already a step ahead of you, kid" look on his face. Anyway, Santa learns through his various Patriot Act techniques that Billy wants nothing more than to spend a Christmas with his parents, and Lupita would like nothing more than a doll. In the real world Santa wouldn't do shit for Lupita and would, instead, give all the toys to Billy in an effort to satiate the void in his life where his parent's affection should be, but this is a family movie and it's the time of year for miracles, so Santa makes an effort to grant their Christmas wishes during the course of his six-house trip.

However, Pitch is still on Santa's trail, and that pesky demon is 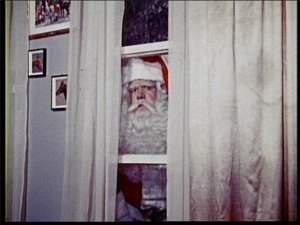 This guy watches your children sleep. Doesn't that make you feel better?pulling out all the stops to put an end to him once and for all. Thankfully Santa can see right through Pitch's dirty tricks, and he turns the tables on him every time. My favorite is a scene in which Pitch has prevented Santa from entering a house by obstructing the chimney so he has to use the front door. From inside the house, Pitch blows on the door handle to make it red hot so that when Santa touches it his hands will get severely burned, much like that scene from another Christmas masterpiece, Home Alone. Fortunately, Saint Nick sees right through his scheme and sneaks in through the window. While Pitch is distracted with the doorknob, Santa removes from his bag a toy cannon that shoots a large missile with a needle on its tip so that it will stick to whatever surface it lands on (seriously, toys were much more bad-ass back in the day). Santa aims it at Pitch and gets him right in the bottom, much to our viewing delight. I'm not sure how funny that sounds on paper, but I can assure you that you haven't lived until you've seen the devil blow on someone's knob while Santa Claus nails him in the butt with his massive torpedo.

I could probably go on and on about Santa Claus' great production values, wonderful acting, brilliant dialogue, remarkable special effects and delightful narration that, in no shape or form, comes off as irritating and wholly unnecessary, but I'd rather have you experience it for yourself. If you are still reading this, then shame on you! Why aren't you already watching this magnificent picture? It's also available on home video as an episode of Mystery Science Theater 3000, but why would you want to watch them rip into this seasonal classic? Whichever way you decide to watch it, be sure you take time out during the holidays to gather your family around the television and watch Santa Claus, a movie that you will in no way regret having seen, spent money on, or subjected others to. Now if you excuse me, I need to get to the hospital so that they can pump my stomach free of all that Zoloft I took earlier.