The Twilight Saga: New Moon was the only movie that mattered this week. Except it didn't really matter very much.

EXPECTATIONS: I had the misfortune of s 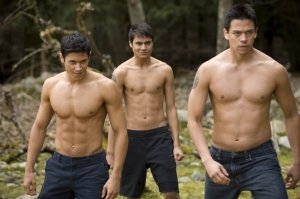 Pack of werewolves or prissy A&F models? Bella still can't figure out what makes a man (hint: it's not a waxed chest).eeing Twilight twice, and it's not a film that improves on subsequent viewings. Unfortunately for us, meaning humanity as a whole, nothing says inevitable sequel like a $70 million opening weekend (if you didn't see this film coming, you're probably the kind of person who has to go everywhere wearing a helmet). All of this is quite a shame because Twilight was a two-hour bore driven by the most underwhelming romance since Tim Robbins almost blew Boggs in The Shawshank Redemption. Nevermind, though; New Moon ostensibly represents a new direction for the franchise, as the producers replaced director Catherine Hardwicke with Chris Weitz (responsible for the film that killed New Line Pictures, The Golden Compass).

So the question stands: Will a new director make New Moon an improvement over its predecessor? Will New Moon offer two hours of balls-to-the-wall excitement instead of background noise for a fitful nap? Will Kristen Stewart lay off the reefer long enough to turn in a performance that amounts to more than nervous murmurs and indifferent sighs?

The events of New Moon (the full title is The Twilight Saga: New Moon: Based on the Novel 'New Moon' by Stephenie Meyer, but as with Precious, there's no way in hell you're getting me to write that more than once) takes place shortly after the previous film. Bella Swan (Stewart) and Edward Cullen (Robert Pattinson) have graduated high school and are as happy as any intermortal couple could be, at least until Bella attends a birthday party at the Cullen home and nicks herself. The sight of blood leads the Cullens to a startling realization: They're vampires, which is easy to forget when you've only been a vampire since the First World War. The Cullens go apeshit and try to kill Bella, coming this close to ending the franchise on a high note.

Unfortunately, with his penchant for ruining everything, Edward saves Bella from becoming fang chow and New Moon lumbers on. It is only now, at this moment, that Edward realizes their relationship is doomed. He dumps Bella in the middle of the forest, and, like a true gentleman, he skips town with his family. How does Bella handle all this? The only way she knows how: By being a borderline-psychotic unlikable little shit. She locks herself in her room for months, sends daily e-mails to the Cullens (none of which they receive, let alone answer) and starts suffering from night terrors. Common for most girls going through breakups, right? Things seem bleak for Bella and it almost seems like she's about to off herself in a final act of mercy (for the audience, mind you), but again she is saved by a supernatural boy toy. 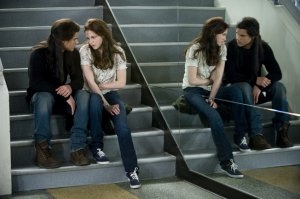 Jacob should bring some welcome color to the Twilight franchise, but they even manage to fold him into the drab grays of mediocrity.Enter Jacob Black (Taylor Lautner), Bella's childhood pal, now a standard-issue movie hunk. After learning she has an appetite for thrills during a bafflingly unnecessary sequence in which she rides with some stranger on the back of a motorcycle, Bella procures a pair of worn-down motorbikes and asks Jacob to repair them for her. A budding-romance montage ensues as we watch these two grow closer, and why wouldn't Bella want Jacob? He's got all sorts of positive qualities that Edward lacked, such as a pulse and an emotional spectrum wider than "meh." The kid's also built like a brick shithouse and spends more time shirtless than Matthew McConaughey. (Seriously kid, it's winter in Washington. What are you trying to prove?)

Things seem to be going fine for the new couple until -- uh-oh! -- Jacob reveals his Dark Secret: He's a werewolf! This turns out to be something of a put-off for Bella -- after all, it's not like she's dated movie monsters before! So what if Jacob turns all violent and moody every 28 days? That's just one more thing he and Bella would have in common (hey-O!, am I right fellas or am I right?). To make matters worse, Edward still finds his way into the film despite his not actually physically being there. Whenever Bella is about to do something idiotic -- in other words, twice per scene -- Edward appears as her spirit guide. I'm guessing it's all done in the name of foreshadowing, seeing as how the third act hinges on Bella saving Edward from doing something colossally stupid, but New Moon's badness is directly proportionate to Edward's screen time, so obviously it suffers when he plays Obi Wan to Bella's Luke. Am I losing you here? Sorry. 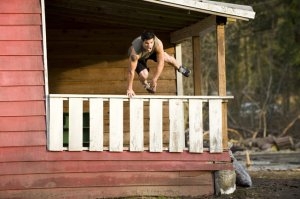 Bella's favorite werewolf trains for the Goth Olympics.en with Steven Fucking Spielberg at the helm, the Twilight franchise will suffer from lackluster performances whenever Stewart or Pattinson are within spitting distance of the movie set. Both seem completely incapable of expressing any emotion to one another apart from boredom or sadness -- although, when the audience plays nice, they reward us with both bored and sad. Lautner tries to mix it up a little with irritating teen angst and a half-hearted sense of humor. His performance would be ho-hum in any other film, but compared to the ones his co-stars give in New Moon, he might as well be Marlon Brando. New Moon also continues Twilight's legacy of stretching novellas to epic lengths, taking 130 minutes to do what any competently made motion picture could do in half that time, filling in the gaps between genuine plot points with scenes of Edward moping, Jacob brooding and Bella behaving like a retard, and the three of them playing musical chairs with those emotions until it's a pallid blur of retarding, brooding mopes doing nothing in a rainy shithole for, after all is said and done, approximately 500 minutes.

I could rag on New Moon until the wolves come home, but the bottom line is that it's critic-proof. It has a fanbase, all sequels are go and the actors are locked in by contract. So why did I subject myself to all this pain in the first place? Perhaps I'm a glutton for punishment. Perhaps it's because I actually like Pattinson and Stewart in other movies, when they aren't phoning in boredom for a paycheck. Perhaps I'm hoping that at some point in a Twilight film, all of the characters will suddenly stop what they're doing, break the fourth wall and say, "Wait a minute, this is shit is fucking retarded," and commence with an Underworld-style vampire-on-werewolf free-for-all for my amusement.

In the end, however, New Moon is just more of the same. For all the folks out there who will find themselves getting dragged to this film by dates or friends, I'm pleased to say that New Moon is at least marginally better than the first film, in the same way that cat food is marginally tastier than dog food or a spinal tap is marginally more enjoyable than attending New Moon.