The Year is 1993. Cthulhu has been called. Steve takes over as Keeper and sends Zack on an adventure through mystery and madness using Call of Cthulhu's 1990's Handbook. Horror, and the music industry, will never be the same. 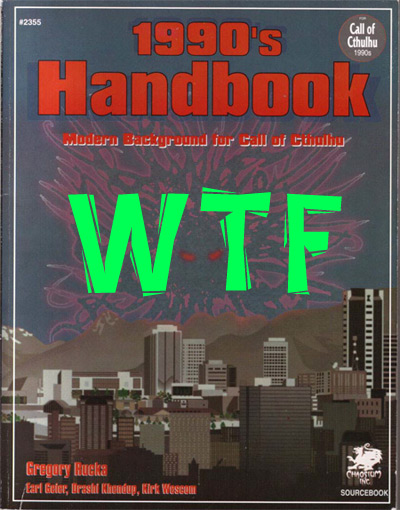 Steve: I am pretty pumped to be running Call of Cthulhu. I wanted the 1890's version, but you insisted on the 1990's for some reason.

Zack: I had my reasons.

Steve: Like you did with me, since Lovecraft is a harsh mistress you created more than one character and I will help run them while you play your main character.

Steve: Based on him?

Zack: No. It is literally Kurt Cobain.

Steve: I don't know how I feel about this.

Zack: At the height of his power, Kurt Cobain turns from grunge music to cosmic mysteries. He has some additional skills that will help him research the occult and use magic.

Steve: What about your other party members?

Zack: They are Lisa "Left Eye" Lopes and Eric Lynn Wright AKA Eazy-E.

Steve: Are they mercenaries?

Zack: No, they are amazing performers, but also a demolitions expert and a linguist specializing in ancient languages respectively.

Steve: How did they meet and form a group?

Zack: The 1992 MTV Video Music Awards. When Krist Novoselic threw his bass into the air and died on stage performing Lithium and they all joined forces to turn him into salt and resurrect him.

Steve: Did it work?

Zack: Not really. He's alive, but he came back changed. He's pretty much phoning in his performances and he eats mice.

Steve: Alright, I'm still not 100% on board with you playing real people, but let the adventure begin!