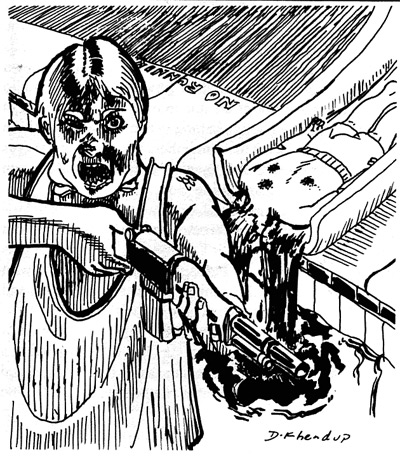 Steve: On the plus side there is a big fat prostitute standing outside the motel's office and she looks like she might know where to score drugs.

Zack: My kind of gal! Alright, I'll let E and Left Eye get settled in while I go score some H.

Steve: The prostitute says her name is Tammy and she has some drugs in her room but you've got to pay her up front.

Zack: I've been burned on bad scag more times than I can count. I'm not handing out any cash until I can see it's clean and not a sack of detergent.

Steve: She agrees and takes you to her room. It smells really strange.

Steve: As you walk inside you encounter a scene of absolute horror. Rotting meat decorates the carpeting. Gnawed bones are heaped onto the bed. Several pairs of red eyes peer at you from the darkness of the bathroom.

Steve: The fat prostitute grabs a machete from underneath the bloody pillow on the bed. "Time for dinner!" Foul-smelling, horrifying humanoids emerge from the bathroom, hissing and waving their claws at you. Make a sanity save.

Zack: I made my save, but this is worse than the time Dave Grohl played one of his songs for me. Imagine if Dave Grohl wrote music. It would be almost as bad as if he were a singer. What a fucking nightmare world that would be.

Steve: You manage to shake off the horror of the moment, but you are still about to be attacked by a machete-wielding fat lady and her three pet ghouls.

Zack: If there is one thing Kurt Cobain does not fear, it is death. Cry havoc! I draw my double tonfa from their concealed holsters in my armored flannel.

Zack: It's on the sheet, Steve. Read it and weep.