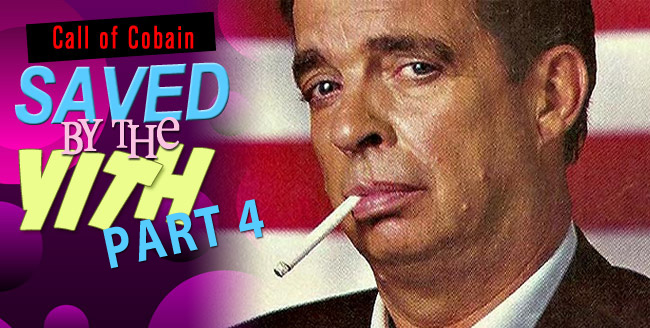 Steve: We ended last time in a bit of a pickle.

Zack: Cobain, Eazy-E and Left Eye had gone out to the Salton Sea to the office of a pro-nuclear activist group, only to discover a massacre, ray-gun burned bodies, and a strange machine in the basement along with enough supplies to last through doomsday.

Steve: Then the cops showed up.

Zack: The cops, FBI, and a helicopter. Also Eazy-E went temporarily insane and he is spouting mythos reggae. But I decided he is coherent enough to play a flute. Go ahead and tell everyone why he is going to play a flute.

Steve: To summon a Servitor of the Outer Gods.

Zack: E knows how to summon and bind the monster, but he doesn't know much else about the monster. It's going to take a few minutes to cast the spell, so you're going to have to hold the cops off for a while.

Steve: We can seal ourselves into the bunker basement thing while he's casting it. That way at least they'll have to batter their way in to get to us.

Zack: Left Eye seems pretty freaked out about what you are going to attempt. Cobain is so high he thinks it sounds amazing.

Steve: Yo I didn't ask your opinions!

Zack: No, Steve, if you're going to have Eazy-E talk it can't be your semi-racist shorthand. You need to write it like Snow sings it.

Steve: Irie, can play the Azathoth man flute or police-a gonna bust down the door, put us in bracelet, no man put me on the floor.

Zack: Well played. You retreat from the flashing lights of the police cars and FBI vehicles and head down into the basement. You shut the big vault door behind you. It seems pretty secure so you should have time to do the ritual before they can get inside.