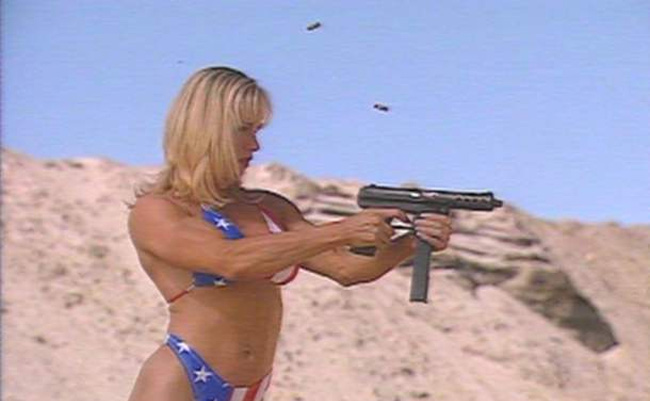 Zack: Morton Downey's amusement with your questions seems to have played out. He stiffens up and raises the pistol again. "Now, assassins or not, I'm afraid that I have to kill you."

Steve: Oh man. Okay. Kurt is going to try to disarm him using his quickdraw tonfas.

Zack: As Kurt steps forward and pops his tonfas out the door bursts open behind you. A small group of men in berets and green uniforms storm into the room. They aim Sten guns at the bikini babes, your group and Morton Downey.

Steve: These guys must be the traditionalists. Is there any cover?

Zack: No. In fact, Morton Downey grabs Kurt Cobain and holds his gun to Kurt's head and uses him as a human shield. "Don't move or I'll waste him."

Steve: Can Kurt disarm him?

Zack: It's going to be extremely difficult and if he tries and fails he's liable to get blasted.

Steve: What about E? Can he like use his magic to call out to Station hiding in Janet Jackson's dressing room?

Zack: It will take him a turn, but I'll let you spend his last magic point and say he falls unconscious in order to call out to the servitor.

Zack: While Eazy-E is projecting a distress call to Station, the leader of this group of paramilitary soldiers holds up an amulet. "No more tricks. Give it up." A wave of magic seems to distort the bikini babes and they become two hideous ghouls clutching Uzis.

Steve: That will kill a boner for sure.

Zack: Morton Downey shouts at the commandos. "Lap dogs of the status quo. You think you are better because you serve different masters? Look at all the humans you slaughtered in Salton City."

Zack: E collapses to the ground. The guy in the beret starts to angrily reply when screams erupt in the hallway. He just has time to turn around as a writhing pile of tentacles smashes through the door and rips two of the commando guys in half.