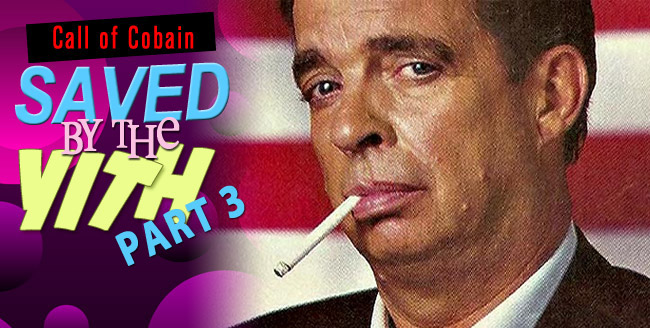 Zack: Last time Kurt Cobain defeated ghouls disguised as Ninja Turtles, but not before receiving a serious injury, Eazy-E discovered the waiters at a Chi-Chis seem to be suffering from radiation poisoning, and Left Eye blew up a Morton Downey Jr. campaign office and found a lead-lined safe and a crushed gem.

Steve: And more pamphlets from that American Prosperity place that you said was in Salton City.

Zack: Right, the pro-nuclear energy group that seems tied somehow to Downey's presidential campaign. So you have a few leads, what are you going to do?

Steve: We were going to go to Seattle to talk to Courtney Love about the busted up gem.

Zack: You arrive in the dreary city of Seattle. According to the radio, Downey is up in the polls, and with elections only a couple weeks away it is looking more and more like he has a real shot at winning. The final presidential debate is coming up and will be held in Los Angeles at Mann's Chinese Theatre.

Steve: What party does Morton Downey belong to?

Zack: The Like It Is Party. He tells it like it is, no varnish, and, buddy, you're just gonna have to deal with it.

Zack: Courtney Love has a metaphysical geology lab at the University of Seattle. You walk in and she is in a lab coat and carefully aiming a green laser at a 10-foot geode.

Steve: I'll have Kurt do the talking.

Zack: Kurt is there but he is totally out of it right now on heroin. He has been riding the horse pretty hard since the Teenage Mutant Ninja Ghouls shredded his torso. He is also wearing bloody bandages under his flannel.

Steve: Alright, Left Eye will do the talking then. "What up, Courtney Love?"