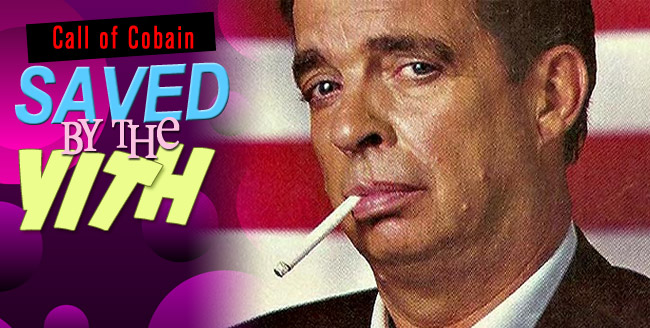 Zack: Welcome back to a world of cosmic terror that resembles our own, but is much more terrible. And cosmic. It's the 1990s!

Steve: After running the first 1990s Call of Cobain adventures I am reluctantly letting you take over.

Zack: Why should you be reluctant? I'm the one entrusting my beloved team of crack detectives to you. I swear, if you get Eazy-E killed or make Left Eye go insane, I am going to be very disappointed.

Steve: You're the one who turns every Call of Cthulhu game into a slaughter of investigators. Their blood will be on your hands, dude.

Zack: It's 1992 and you guys are hanging out at the Cobain family mansion in Seattle. Kurt is writing lyrics, Left Eye is practicing dance moves and Eazy-E is rolling an enormous blunt and reading the original German edition of Unaussprechlichen Kulten.

Zack: Suddenly, Kurt Loder interrupts that Temple of the Dog video that is playing all the time with some breaking news. Long shot third-party presidential candidate and talk show host Morton Downey Jr. has been found in an airport bathroom beaten and covered in occult graffiti. MTV is showing footage of him and he looks shaken and he has messy black marker scrawled on his face.

Steve: Eazy-E is going to look carefully at the screen to see if he can identify any of the occult symbols.

Zack: Yes, they seem to be real occult symbols, but they're poorly executed and backwards. It's as if Morton Downey Jr. drew them on his own face.