The Call of Contestlhu: Hard Ticket to Baghdad 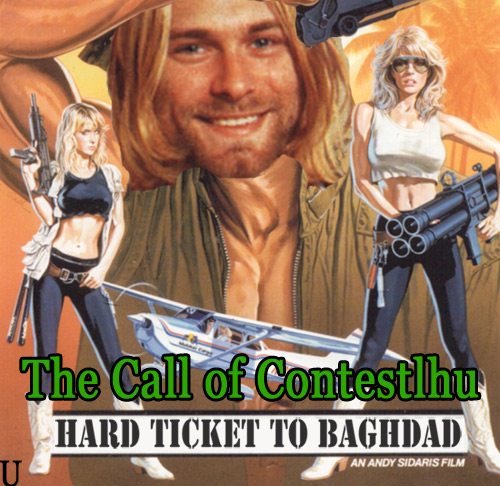 WTF, D&D!? has not held an annual contest since August of 2011, but in strange aeons, even the death of contests may die. Here is the short and sweet of it: we are holding a contest inviting people to create artwork for Call of Cthulhu set in the 1990s. If you are short on ideas you are encouraged to illustrate a scene from one of the past adventures of Kurt Cobain, Eazy-E, Lisa "Left Eye" Lopes, and Station or use the Lollapaloozicon random hook generator to give you a 1990s Cthulhu scenario. Or create a cover for the imaginary module Hard Ticket to Baghdad. The best of the artwork will be used in an upcoming play-through of this imaginary module. Your artwork should be no smaller than 650 pixels wide by 400 tall. You must submit them to Zack with the subject line CONTEST no later than May 1st, 2014. The grand prize is a $100 Amazon gift card. Second place is a $50 card and third is $25.

Steve: Wwooooooooo!!! New contest! Why has it been so long?

Zack: Because the last thing you chipped in were some beat up D&D books. I have to pay for this stuff.

Zack: Also, I am embarrassed for the name of this contest.

Steve: You came up with the Hard Ticket to Baghdad part.

Zack: Andy Sidaris was a genius and Hard Ticket to Hawaii is one of the greatest movies of the twentieth century. How could we celebrate the 1990s without referencing the films that we were all watching on late night HBO in 1993?

Steve: Uh, you know I agree with that.

Steve: So here's the deal, we are going to be taking Kurt Cobain, Eazy-E, Lisa "Left Eye" Lopes, and their mythos pal Station on another adventure this summer.

Steve: This imaginary module is going to be illustrated by you!

Zack: The artwork doesn't have to be from the module, any 1990s Cthulhu artwork is great, from your own original 1990s Cthulhu ideas to scenes from the past Call of Cobain adventures, random hooks from the Lollapaloozicon, or inspiring cover art for Hard Ticket to Baghdad.

Steve: I hope somebody does a picture of Station launching a police helicopter to Carcosa.

Zack: I think I'm more of a fan of Kurt Cobain tonfa fighting with teenage mutant ninja ghouls or maybe Eazy-E summoning Station. But I really want to see some cool covers for Hard Ticket to Baghdad.

Steve: What about the time Kurt Cobain snapped a giant evil prostitute's neck and then tonfa fought ghouls for heroin?

Zack: A highlight of his career. But we're getting off track. Please submit your entires to me at zackparsons@somethingawful.com by no later than May 1st, 2014. Help me out by using the subject line CONTEST. Winners will be announced May 8th.

Steve: Are there any file restrictions?

Steve: This is Cthulhu we're talking about. No upper size limit?

Zack: Beyond the limits of mankind's ability to comprehend PNGs not allowed.

Submit your 1990s-inspired Call of Cthulhu artwork to zackparsons@somethingawful.com and use the subject line CONTEST

All entries should be JPG, GIF, or PNG images no smaller than 650 pixels wide by 400 pixels high