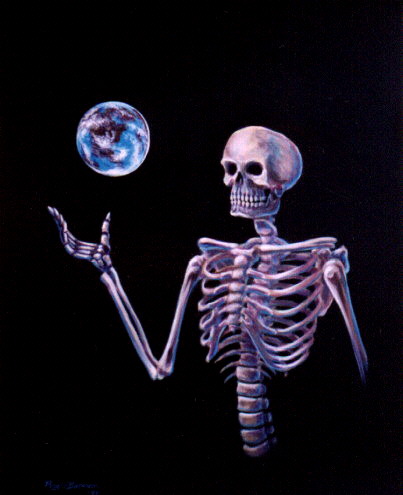 Lowtax:: ASTRONAUT FAILS TO PLANT AMERICAN FLAG ON MOON WHEN HE DISCOVERS IT'S ACTUALLY A GIANT FUCKING SKELETON HEAD.

Zack: We don't orbit the sun, as originally believed, but instead we orbit a skeleton ten times the size of the earth that is orbiting the sun.

Zack: He banks earth off the door and straight into the trashcan.

Zack: Where it belongs!

Lowtax:: Palin warned us all and now the chickens have come home to roost. In space. On top of a giant skeleton torso.

Zack: I knew Obamacare was going to be bad, but this is ridiculous.

Lowtax:: What are you inferring here?

Zack: He should have gone with a universal option.

Zack: Meaning an even bigger skeleton.

Lowtax:: Your option is: HUMONGOUS SKELETON INHABITING THE UNIVERSE or BUY MORE GUNS.

Zack: The worst part is now that NASA has discovered a gigantic skeleton, they are going to spend 50 years and dozens of space missions searching for water on the skeleton again and again.

Lowtax:: Nah, they'll just give up and China will do it.

Lowtax:: NASA won't even try to find out if his other hand is in prime prance position.

Zack: China isn't going to do bullshit general science. They're going to land all over the solar system and start building dormitories for basketball teams.

Zack: And then they'll beat the skeletons.

Zack: Enough for a pickup game.

Lowtax:: Devout Mormons believe when you die, you get to become your own great space skeleton.

Lowtax:: Which is why I don't trust Chinese Mormons.

Zack: Joseph Smith discovered the space skeleton texts written on his eyelids and tongue when he looked in the mirror.