The Battle of the Stupidest Rifts Characters

It comes as no surprise that the junk drawer of role playing games features a lot of stray and silly character classes for players to choose. If you own every Rifts book - and we don't have anywhere near a complete collection - you probably know that every single one of these includes at least one new character class. Sometimes they make sense and are just themed around the book's subject matter. Sometimes they are frigging ridiculous. Today, Steve and Zack have each picked three idiotic characters and put them head to head to decide which one is the stupidest, most useless character. They avoided combining silly races with silly occupations and just stuck to the core of stupid. 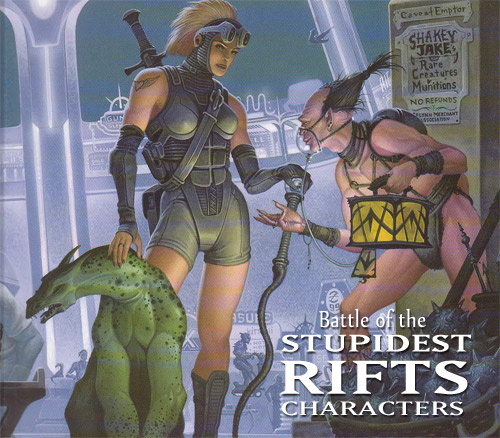 Steve: This was a lot of fun.

Zack: Yeah, nothing better than spending half my weekend paging through Rifts books looking for stupid things.

Zack: Oh, wait, I found them. They are all stupid things.

Zack: You're making my points for me here, Steve.

Steve: This might be an easy battle. Let's hope you're able to pluck the diamonds of stupid out of what you think is an ocean of stupid.

Zack: Less an ocean, more of a kid's sandbox that the cat has been in, but yes, I have plucked the stupid turds from the sand castle.