1988's Victorian space adventure "Space: 1889" was Frank Chadwick's early stab at steampunk. Players took on the gentlemanly pursuit of the sublime. Buttoned heroes and heroines journeyed across a very populous inner solar system in vessels made from "liftwood" powered through the ether by Thomas Edison's electric space engines. Various steam contraptions and improbable gadgets assisted the players and if those weren't sufficient to a task characters could invent their own industrial-age doodad. In this era of steampunk silliness it's no surprise that Space: 1889 is being re-released in the summer of 2011, just in time to set pasty-hearts aflutter for a gilded-era of white privilege. For the rest of us, let's look back and wonder WTF. 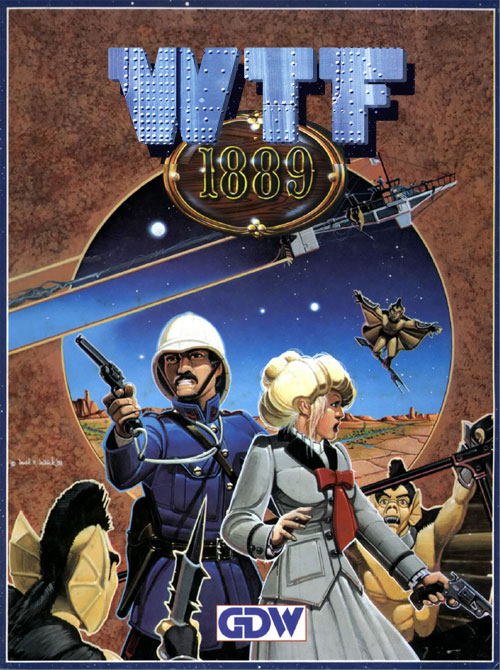 Zack: Ahhhh, steampunk. All the techno-fetishism of cyberpunk without the veneer of relevance.

Steve: It's relevant as heck. There's all kinds of commentary about class and about how things used to be better back before VCRs and whatever else.

Zack: Yes, "whatever else."

Zack: You're in luck! Amazon.com is the clogged sewer tunnel into which a thousand authorial anuses are dooking out a steady porridge of steampunk. Grab a spoon and dig in!

Steve: Sorry they can't all be WWII alternate history scenarios where goblins get elected Hitler. How's that for relevant? You know in case we have a Hitler problem or whatever with goblins.

Steve: I'm sorry. I didn't meant to get nasty like that.