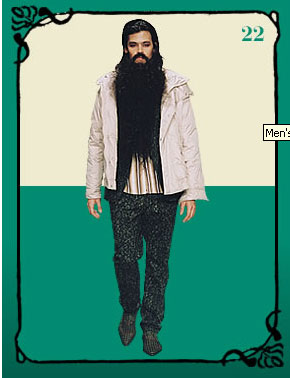 Zack:I actually had a friend who sort of looked and dressed like this guy. His beard was to human scale, of course, but he was a huge communist. The kind of guy who would silk screen hammers and sickles where the stars go on an American flag.

Dr. Thorpe:This guy looks like he got up on the wrong side of the bed. Maybe it's because he's a biker who's been dressed from The Gap and forced to walk down a runway by terrifying Fu Manchu women. I'm almost taken aback by how normal his clothes look. This isn't the Etro I've come to love. I guess, aside from the speckly pants, the beard is the fashion in this one.

Zack:Did Etro design the beard or is there a beardery where he just bought all of these off-the-shelf?

Dr. Thorpe:Maybe Etro's just branching out into the facewig business and this is their big exciting premiere.

Zack:He's just hedging his bets. If the fashion career falls through he's got the giant beards to fall back on.

Dr. Thorpe:I have this fantasy that the beard is fake but the mustache is real. Because it makes me like the model more if he has a gigantic black mustache.

Zack:It's almost a Magnum P.I. mustache. I bet this guy could really solve some amazing crimes in Hawaii. Just put him in a Ferrari, Etro could be his Higgins/Robin Masters, and he could have all of these flashbacks to the time he was eating at a Vietnamese restaurant and his huge black friend TLC started choking on spring rolls.

Dr. Thorpe:I think the next big avenue in fashion design should be "ridiculous disguise chic." There's something inherently sexy about a disguise. It makes you feel like a secret agent. I think the giant fake beards are moving in this direction. Next it's going to be big aviator sunglasses, trench coats, and newspapers with eye-holes in them.