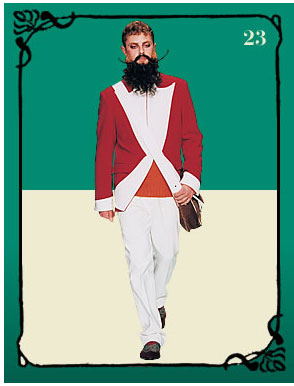 Zack:Jude Law versus the army of Shaka Zulu

Dr. Thorpe:"You have failed to protect the Queen. Turn in your big tall hat immediately and report to the runway."

Dr. Thorpe:This is a real clash of cultures because on one hand he looks like a British soldier, and on the other hand he's got a Conquistador beard. And then of course he's got a purse. Like a goddamned woman. He's Ms. Chauncey Cortez

Zack:He's also wearing a turtleneck, which leads me to believe that he is going to post on his live journal about how much crrrrrap he's got in his purse and how he hates digging around in it when the 18th Fusiliers are battling the Aztecs. What he really needs is more piping. There is way too much negative space on that uniform of his. I want to see some brass buttons and little tin medals. I want to see some pizzazz!

Dr. Thorpe:Compared to some of the other clothes in this collection, he looks almost tasteful, aside from the beard. But when you take away the context of the other Etro clothes, I think if I saw this guy on the street I'd probably throw eggs at him with my hooligan friends.

Zack:I bet his purse is just full of books he's never read by James Joyce and Foucault. He's hurrying to a coffee shop to take them out and page through them until the girl behind the counter notices him.

Dr. Thorpe:And asks him "what the fuck is with the beard?" It's a good attention-getting device, I guess, even if it makes people instinctively want to harm you.

Zack:It's a conversation piece, definitely. It's like a ridiculous facial piercing only it takes years to grow and you look really stupid until you reach that point. By "that point", I mean to say you never stop looking stupid.