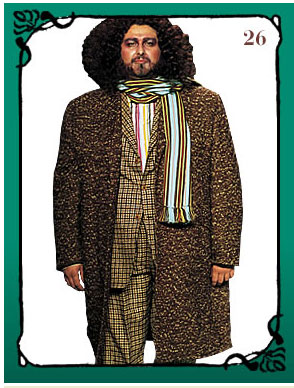 Dr. Thorpe:Maybe a guy like this has to really go out on some wild limbs in his quest to appeal to women. "I'm not rich, I'm not handsome, and I'm not interesting, but god damn it, you're going to notice me."

Dr. Thorpe:His coat looks like it's made of corkboard. At least I'll give this guy credit for bringing his own beard.

Dr. Thorpe:But he does have that big hairdo. It looks like his face has just hatched from a chocolate egg.

Zack:I think it looks more like he took down and scalped Diana Ross at Bob's Carpet Warehouse while she was bending over to check out some Stainmaster plus. That is diva hair for sure.

Dr. Thorpe:Yeah, he got too busy keeping up his oblong hairdo to concentrate on going to the gym, and his modeling career floundered until Etro started hiring "grotesques."

Zack:For some reason I can't stop picturing this guy riding a scooter. I think it's the scarf over the shoulder like it's blowing in the wind as he zips around the streets of Paris on a plaintive Vespa stretched to the absolute limits of its body's tensile strength. Then he stops at a café and orders an espresso in one of those tiny cups. Like a giant in the land of normal men.

Dr. Thorpe:Maybe I'm thinking in more esoteric and metaphorical terms, but I am imagining this man as a lost baby duckling. Waddling through a crowded street, looking desperately for his home and his family. But you'll never find them! They fell down a manhole!

Zack:I want to be with you, but I just can't be. This guy looks way too arrogant and that's just not something I can associate with a baby duck. Maybe if a baby duck became president or something, then I could see where you're coming from. Until then, I just can't bridge that gap.

Dr. Thorpe:If you interpret his facial expression right, it looks like he's almost in tears though. But I suppose they're probably "I SAID NO FOAM!" tears.