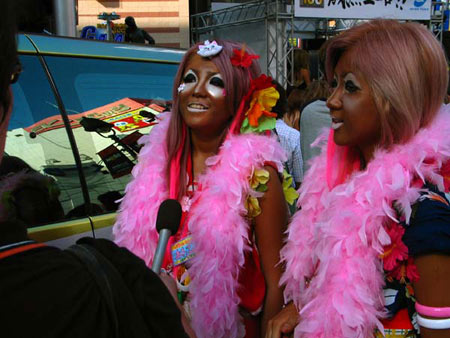 Zack:I hate it when you leave cookies in the oven too long and you have to scrape them off the baking sheet like this.

Dr. Thorpe:They have the opposite of that disease Michael Jackson has.

Zack:I wonder what the guy is asking them. Maybe: "does that hurt?"

Dr. Thorpe:She's just staring up into space though, I doubt she can even see or hear anymore. Radiation is a terrible thing.

Dr. Thorpe:Jesus, I can't think of anything to say about this, it's mentally exhausting just to look at it. It's like trying to get one of those magic eye pictures to work when you're drunk on cough syrup. And I know we've both been in that situation.

Zack:I was going to make some comment about the feather boas but then I realized that maybe those are animal skins from some hideous creature that infests the day-glo catacombs in which these two make their lair.

Dr. Thorpe:The skin cancer rate in Japan in thirty years is going to be astronomical. The whole island is going to look like a day-glo leper colony.

Zack:You know, in the original War of the Worlds there was this stuff called the red weed that the martians brought with them to turn the earth into a more pleasant environment. It just grew everywhere, over houses, fields, and rivers. I'm beginning to think this is sort of like that. At night these people lay down and the bronze just starts sending out fronds and feelers. By dawn another dozen or so people are down on the street throwing peace signs at each other and clanking plastic bracelets.

Dr. Thorpe:I finally figured out what the girl on the left reminds me of: remember the poster for Goldfinger?

Zack:I can definitely see the resemblance, although I think the gold paint was much more sparingly applied than the bronzer.

Dr. Thorpe:There was that old urban legend that the girl on that poster died of "skin suffocation," which is clearly ridiculous. But if anyone is a candidate for "skin suffocation" it's this girl.

Zack:If she ever scrubs all that stuff off she's going to be one swollen mass of infected blackhead. She would squeeze her nose and they would shoot out like corks.

Dr. Thorpe:Well, last we saw Etro, he was still pretty clean, so we can rule him out.

Zack:Etro barely exists as a physical entity, there's no way this stuff is getting to him.

Dr. Thorpe:He's like a god of antiquity, he comes down from his kingdom and walks among the mortals, dictating beard fashion to them, but none may touch him without withering to ash.

Zack:Even hairs and sloughed skin turn into gossamer-winged cherubs that flit away into the ether.

Dr. Thorpe:Maybe what we're seeing on these poor souls is just the horrific effects of staring Etro in the face.