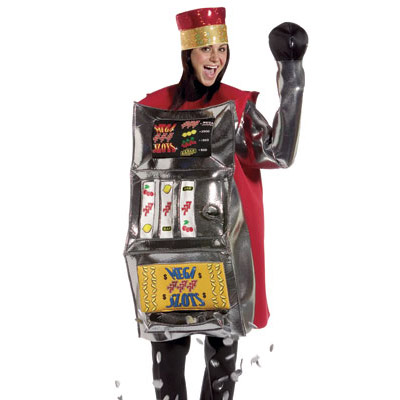 Zack: Finally, the wait is over! A slots costume!

Dr. Thorpe: I thought I'd thought of every single way to objectify a woman, but this costume has proven me wrong.

Zack: Works great as a doubles costume. Get your boyfriend to dress up as an old lady with her social security check cashed into a bucket of quarters. Guaranteed to depress everyone at the party.

Dr. Thorpe: It's also a great costume for a designated driver, because there's really no way to hold a drink. And that kind of sucks, because I don't think a sober person could find much humor in the fiftieth drunk guy coming up and yanking on your arm and then trying to reach up your crotch for quarters.

Zack: I really hope this starts a trend of turning every possible random inanimate object into a Halloween costume. I want to go to a Halloween party next year in an unfurnished apartment and then just fill it up with my friends dressed as lamps and beds and couches and entertainment centers. No one will have any fun at the party because the costumes will all fucking suck to wear but I'll get some awesome pictures for my blog.

Dr. Thorpe: Also, you could probably say "sort of reminds you of the current administration, right?" and then CNN would feature your blog on their "We're A Bunch Of Idiots Who Love Blogs Corner."

Zack: They would love that. They could act all amazed that someone outside the TV box did something noteworthy and then talk all condescendingly about how I am only 27 and on the Internet. "Look at the cute cyberspace superhighway person, he thinks he's media."

Dr. Thorpe: Remember that scene in "Big" where they're in that meeting coming up with new ideas for toys, and that square old guy comes up with a Transformer that turns into a building and Tom Hanks gets all pissed because a building doesn't even do anything, so what fun is that? The same square old guy came up with this costume.