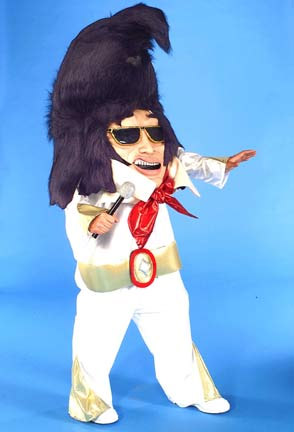 Zack: This is the sort of thing I have nightmares about. Hair covered bananas singing Jailhouse Rock. I should probably talk to a therapist about those.

Dr. Thorpe: I have nightmares about being stuck in a horrible costume and falling down and not being able to get up. People make a big deal about Halloween safety for kids, but what about adults? Somebody is going to get drunk in this thing and fall down, and he'll be as helpless as a flipped tortoise.

Zack: It's so horrible it makes me want to buy fifty of them and then get groups of people to stand in darkened alleyways downtown. Like you walk past the alley and you see five of these guys standing around a burning oil drum. You'll keep walking, but you'll never forget what you saw.

Dr. Thorpe: It would be like that part in The Shining where the guy in the dog costume is going down on the old man. There's nothing objectively scary about it, but it's just fucked up enough that it chills your blood.

Zack: Yeah, it is EXACTLY like that. Like you just caught a glimpse of something terrible, but you're not exactly sure why it's so terrible. Some horrible other reality that you had never noticed, but one night walking alone in downtown Chicago you saw them. You saw five sneering hair bananas standing around a burning oil drum.

Dr. Thorpe: I think that in certain circumstances, this costume really demonstrates the true spirit of Halloween.

Dr. Thorpe: I think I'll go ahead and order a few of these. I'll have to wait a few months to wear them, though. Doing it on Halloween wouldn't be disturbing enough. Because there might be a hint of an explanation for that.

Zack: You can't wear them in broad daylight either. You have to like emerge from a sewer wearing one or step out of a stall in a public restroom at some distant forgotten rest stop.

Dr. Thorpe: It might help to modify them so they didn't look like Elvis, too. You could make horrible old man faces for them, and get the clothing all ripped and dirty.

Zack: Maybe you could pry off the sunglasses and put those horrible wide blue leprechaun eyes on it.

Dr. Thorpe: Whoa, slow down, you want people to get scared, but you don't want to trigger the primordial "must kill it" instinct.

Zack: I think possibly the coolest prank would be to put up an ad on monster.com for some amazing job. Like a corporate vice president, seven figure salary, and then give an address for the applicants to come to. The address is like an old abandoned molasses factory and then you just cram it full of people wearing this costume. So when they open the door they are confronted with 20-30 of these. No desks or office equipment, just these guys standing around a molasses stained factory.

Dr. Thorpe: And maybe you could get twenty or thirty old tape recorders with tapes of babies crying and hide them all around the place, playing baby screams at full volume.

Zack: Yeah, and in the run up to the interview all correspondence should be via email and it should all have some weird foreign diction. Like they'll think you're Chinese or something. Then they realize that the whole company is just a bunch of these. We should totally have our own TV show. You know that.

Dr. Thorpe: Definitely. Also, there should be a big pink banner that says "WELCOME TO THE NEW DEATH" or something. Or maybe just "PROBLEM."

Zack: With a question mark, and there should be some really tinny music playing, like some old 1920s big band music on a record player

Zack: When they first open the door all of these guys are just kind of shuffling around. They're all doing things that people do, but not quite. Like moving a broom awkwardly or just holding a telephone receiver that's not connected to anything.

Dr. Thorpe: And when they see the guy come in they all just stop and stare and start wordlessly vocalizing in monotone.

Zack: Yeah, like "Invasion of the Body Snatchers" or something. You could have framed employee of the month pictures by the entrance and they could all just be like turn of the century family portraits.