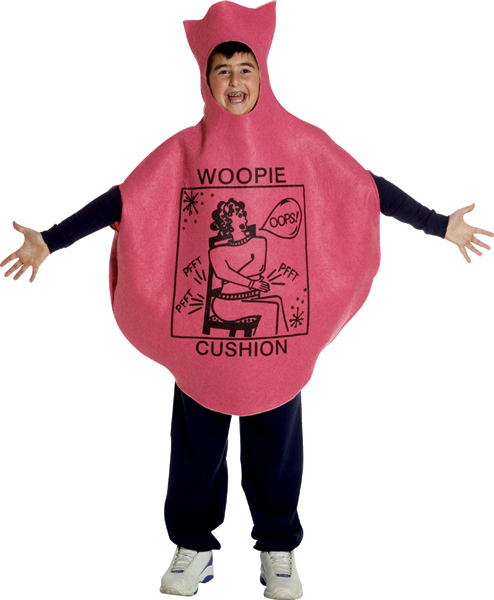 Zackula: Has your child been clamoring to dress up as a prank device from the 1920s? Good news...

Dr. Thorpenstein: The illustration on the front looks like a page from a Tijuana Bible.

Dr. Thorpenstein: Popeye and Charles Lindbergh are going to come out and have sex with her in the next panel.

Zackula: All our filthy cartoons are now manufactured in China. We'll have to settle for a Chengdu Bible where a donkey and a woman work to make iPods and are rewarded with an additional male baby.

Dr. Thorpenstein: The kid himself looks like he's going Ha-cha-cha-cha-chaaaa, like Jimmy Durante (who is also going to jump out and have sex with the lady on the front).

Zackula: He's a regular Katzenjammer Kid, which, coincidentally, used whoopee cushions from time to time. And also did mouth-sex with farty ladies in Tijuana Bibles.

Zackula: Yes, Gumshoe was a game grounded in historical fact.

Dr. Thorpenstein: This is my son, Zysbull, who has a weird name because he's from the future. He's dressed like a sybian orgasm machine.

Zackula: And yet, after all these years, poor Carl Paladino gets maligned for a little horse fucking video. I believe horse fucking has been around for as long as fucking and horses.

Dr. Thorpenstein: Yeah, you could pretty much dress your kid up like a guy fucking a horse today and not get in trouble.

Zackula: And beneath the sheer fabric of the costume...