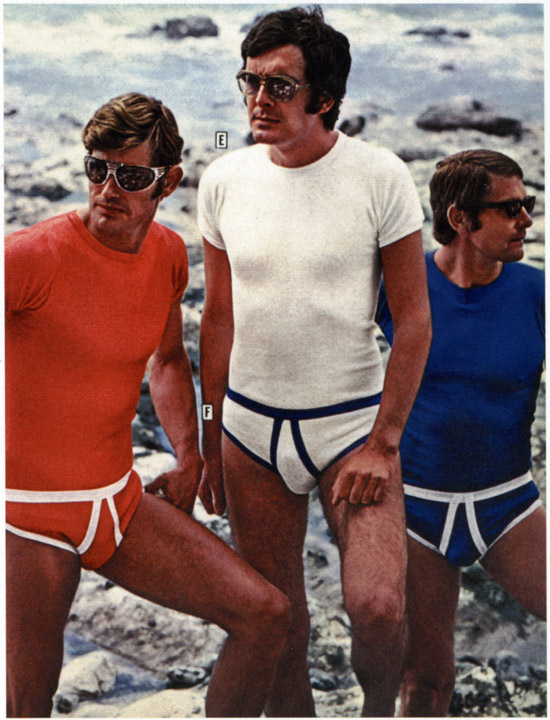 Zack: This is the worst beach party ever. Even the beach is ugly. It's like they decided to go down to the rocky coast and help clean up an oil spill. They're the most poorly prepared volunteers since that Mexican guy who showed up with his hair on fire.

Dr. Thorpe: These guys all look like they want to leave, too. They're all looking around like "wwwwwwelp... looks like it's about that time... yeah..." It's hard to jingle your keys when you're just wearing briefs, so they have to use facial expressions and body language to express their intense desire to get the heck out of there.

Zack: That guy in the background isn't on the same wavelength. He looks like a secret service guy or something searching for threats. Maybe this is what Presidents would be doing for vacation in England if they weren't still some horrible sham democracy based around the power of the crown and all its wicked authority.

Dr. Thorpe: This must be England, where the beaches are sickly and pallid, the men are reddish, and people tuck their t-shirts into their briefs. I'm not sure if the last one is an actual stereotype about England, but based on this picture it should be. Because three out of three of these men are sporting that look.

Zack: I think we noticed a similar trend in a previous Retro SWAT so I think two instances bumps it from a theory to a law. Maybe, I'm not sure, but it's at least worth teaching in a biology class in Kansas.

Dr. Thorpe: If those goddamned liberals will have them teaching anything so unfounded as their filthy secular Darwinism, what would prevent them from teaching about English briefs, and then everyone would be marrying dogs?

Zack: It's a slope as slippery as the oil covered rocks of the Channel Coast. I think that guy in the center looks like he is reacting to some sort of bad news. Like maybe they are being cited by a police officer for some sort of arcane British law. "No convocations of more than two men in bare bodkin in the hour following afternoon tea. You are also soiling the Queen's rocks with your commoner's feet."

Dr. Thorpe: He's incredulous, the guy on the left is mildly pissed, and the guy on the right is so disgusted that he has to bite his lip and look away and fume about it. Yeah, maybe they're overreacting, but guys who group up to have briefs-parties on the beach aren't usually the most emotionally stable cats.

Zack: Maybe he just doesn't want to spend a day in some 15th century torture implement called The Harrower screaming his sins from the Tower of London.

Dr. Thorpe: Then he has to choose between a lifetime in debtor's prison and a ship to Australia.

Zack: My next joke writes itself but Australian readers should go ahead and become preemptively angry.

Dr. Thorpe: Sorry Australians, but Something Awful's official editorial policy is to portray you as loutish, vegemite-gargling convicts. Maybe we'd change our minds if we had even a shred of evidence to the contrary.