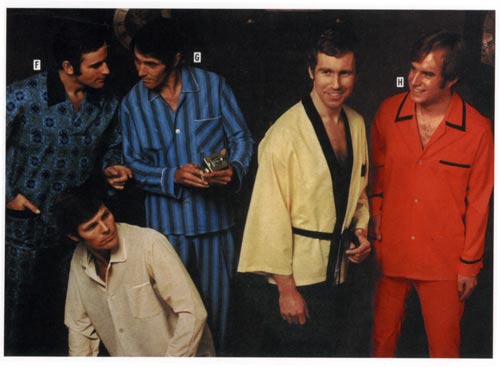 Dr. Thorpe: Oh man, fucking Paul ruins yet another party. Everyone is having a good time and then Paul wheels in there on his little board on wheels and sits there looking pathetic until someone condescends to talk to him.

Zack: He transforms it from good, clean, vaguely homosexual fun into the creepiest and most depressing pajama party since Robert Blake invited a bunch of terminal cancer patients to spend the night in the haunted Auschwitz.

Dr. Thorpe: "So... why don't you get a wheelchair, Paul?" "I don't feel like I deseeeerrrve one, you know? It's just that my life is soooo incredible, and I thank God for it every day, I don't feel like I neeeeed to concentrate on such a worldly thing, a thing that brings along so many associations. When my legs became useless due to a horrifying accident, I decided that I didn't want to be another pathetic guy on a wheelchair, I wanted to glorify God by using this board to get around."

Zack: Kung-Fu George W. Bush looks pretty unaffected by Paul's melodramatic plight. Like he's planning a panty raid and damned if he's going to spend the time looking for a wheelchair ramp. They're going to raid the girl's sorority and Paul will be dragging himself up the stairs with ripped fingernails and bloody hands while the guys are running away laughing with armloads of underwear.

Dr. Thorpe: He's way too coked up to notice Paul. I think they're all studiously ignoring him because he's such a drag, and Paul just gets more and more desperate and annoying every time people manage to get accustomed to him.

Zack: Paul will just sort of sigh and roll down the stairs and land in a broken heap when he sees them. He'll drag himself back onto his roller board and talk about how awesome the panty raid was.

Dr. Thorpe: "I know that lots of guys in wheelchairs like to wear some little pants and a blanket to cover their disfigured legs, but when God decided that he wanted to mutilate me, I knew that he did it for a reason. That's why I only wear these little green briefs. I want people to see my little twisted up legs so they know that God is just and loving and does everything for a reason."

Zack: Definitely, the more you ignore him the worse he'll get. After a couple weeks of living with a party animal like Kung Fu Bush, Paul will be binging on laxatives and then passing out in his own filth in the middle of the kitchen.

Zack: "Did you see that girl back there? She was really complete and whole as God made her. She had legs that went up to her panties, if you know what I mean. And I mean not like my legs, which terminate just above my knees. It just made me want to ride in the cradle with her. Have I showed my cradle to you guys yet? It is wild stuff. Crazy fun. Come on guys, let's go check out my cradle."

Dr. Thorpe: "I think it would reeeeeeally great if you guys came back to my place for a while to check my great stuff out! I mean, this party is great but it doesn't really cater to my special needs. I have a big swing and a tank of nitrous oxide, and my good, good friend Sheila, who is also differently abled, is going to be there to administer the gas and stimulate my prostate. It's going to be so much fun, everyone! You can bring a friend or a lover or just come and watch!"

Zack: "Hey, do you guys want to come with me tomorrow? I volunteered to witness an execution at the federal prison. Yeah, it's a lethal injection. It's this guy I've been sending letters to and he seems really nice and into God. He raped, murdered and ate an 80 year old woman, but we all have our faults. Like my fault is not being able to roll myself onto my back if I fall onto my stomach. I almost suffocated like that once but luckily my home health nurse stops by on Tuesdays and she found me stuck between the couch and the coffee table. I lapsed into a coma, but the doctor said there was only mild brain damage."

Dr. Thorpe: "I'm sorry if I'm bugging you guys, I've just been a little lonesome since all my cats died. Did I tell you about that? My house had a little bit of flooding during the last storm, on account of the fact that they had to lower it from its stilts so I could get in. I used to be able to climb a rope, but after I broke both my arms in three places when I fell down the stairs they're not as strong as they used to be. Anyway, my house had about three feet of water in it, luckily I managed to get up on top of the television and lie there for three and a half weeks until my nurse was able to get in, which wasn't so bad, I had a little bag of Doritos, but it was uncomfortable because the power was all funny and the cable box kept mildly electrocuting me. Anyway, all my cats drowned. Little Boomer and Sam and Cobweb and Stinky and Jake and Charlie and Young Jeezy, and all Jeezy's kittens. It was about twenty cats in all who died. So I'm a little starved for affection! They used to cuddle with me so tenderly!"

Zack: Paul would probably have all of these wild pranks to talk about but they would be just as depressing as his usual crippled showboating. "Oh, hey, did I tell you guys about the time I met Charles Grodin? Yeah, I wrote a bunch of letters to the Make a Wish Foundation under a pseudonym claiming to be a 12 year old girl with lupus. Eventually one of the celebrities agreed to meet me and it was Charles Grodin. He was amazing in Beethoven's Second!"

Zack: "It took me six hours to dress up as a little girl using only my teeth and my special dressing wand. The Make a Wish people came and picked me up in a van and everything. Just as we are pulling up to Charles Grodin's house I had an accident. I tried to pretend it wasn't me, but I guess the smell was too strong and they finally said they would help me change my clothes. I was so into my 12 year old girl character I forgot I have partial male genitalia. It took them a couple minutes but when they realized I was a boy they cancelled the meeting."

Zack: The look on his face was priceless! I yelled "pranked, Grodin!" as they were putting a plastic bag on my lower body to hide my shame. It sort of worked but I had a lot of seepage that day and the bag kept sliding off. Good times, guys. Good times."

Dr. Thorpe: He'll never stop getting invited to parties, either. As long as he still has one person's phone number, he'll be able to guilt trip the guy into telling him about every single party that happens.

Zack: "Hey Laura, according to my calendar it's Roger's birthday, but my invitation must have gotten lost in the mail. Do you know where the party is going to be? Oh, you don't? Well, that's okay. No, really, it's okay. My other question was could you stop by for a minute because I managed to drop a curling iron down my shirt and I can't get it unplugged with my teeth.

Dr. Thorpe: "I would just ask my nurse for help, but her agency fired her because they found out she was slowly poisoning me. I forgive her, she must have been a very troubled young lady. I just want her to come back, because now I have nobody to flip me over when I need to go to the bathroom."

Zack: "Oh, is that a cat meowing I heard? That's so cute. I love cats. I have a cat named Patches. Yeah, he's great, but he climbed up on a cabinet and died a couple days ago and I can't reach him up there. I still remember the way he would play with my catheter when it was dangling out of my ruined groin. Yes, no...no, I'm not crying. No. Not really. Okay, Laura. Thanks. I really appreciate it. I'll see you at the party."