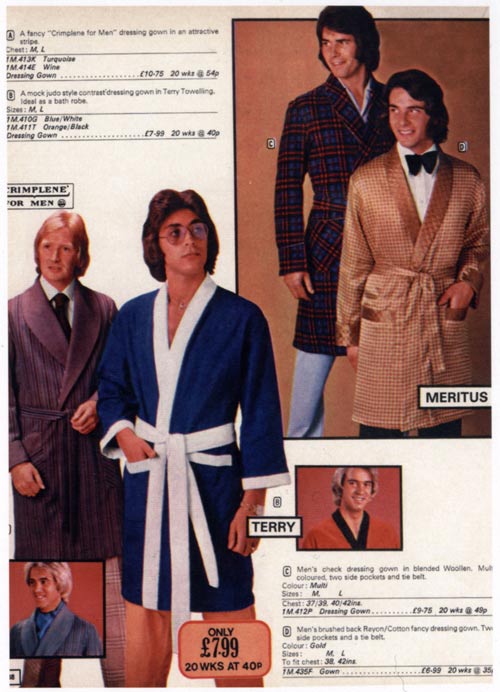 Dr. Thorpe: Oh man, look at those two jocks on the right laughing at Judo Nerd and Albino Bird Boy.

Zack: They just don't respect minorities, like the swarthy and the non-pigmented. Racists.

Dr. Thorpe: "Hey whitehead, quit trying to copy my suit-under-robe look! You ain't even got a bowtie! Yeah, that's right, hide behind your tough guy kung-fu friend, you little pink pussy!" And Judo Nerd is going "one day, I fucking swear to God, I'm going to be big and tough and I'm going to teach those... those buttheads a lesson they won't soon forget!"

Zack: "I'm going to grow a mustache the likes of which even god hasn't seen before. Then who'll have the last laugh?"

Dr. Thorpe: The look on Whitey's face is that wonderful "smart retard" expression. Everyone had one of those guys at their school, the guy who was super good at math or whatever, but he was really, really awkward and maybe autistic, to the point where everyone just treated him like he was retarded.

Zack: Yeah, the kind of guy who smelled like some sort of hygiene product you normally would use on a baby and he would draw these incredibly elaborate spirals on his notebook but when asked to read aloud for the class he would start sobbing uncontrollably.

Dr. Thorpe: And when people picked on him he would sort of sputter for a minute and then make some sort of really elaborate threat like "Mr.... Barnes.... I am... going to... injeccccct you with.... barium sulphate.... and phhhhhhotograph... your... blood..." And then the jocks have a good laugh at him, but then they secretly lie awake all night wondering if he's going to sneak into their house and chop them up with a lawnmower blade.

Zack: He would also give them a false sense of security. Like for three days in a row he would struggle to open a milk carton and then on the fourth day they would look over and he'd just be sitting at the top of a tree outside the cafeteria drinking from a thermos and staring at them.

Dr. Thorpe: Whitey here just came off a three-year phase of pretending to be a robot from outer space, and he's not making the adjustment easily. It's an awkward time in a smartard's life. Leaving the robot phase and transitioning to the really obsessed with trains phase is like puberty for them. It can be traumatic, and they need good friends like Judo Nerd to help them through it.

Zack: Judo Nerd will help him from that phase to the inappropriately sexual phase in which smartard will suddenly grope girls or walk out of the bathroom completely naked with a gigantic erection that lasts for hours.

Dr. Thorpe: And since Judo Nerd has really low self-esteem, he needs someone like smartard around to worship him and think he's the coolest, toughest guy in the world. "Hey... Rodney.... hhhhave you everrrr... kissssed a girl's.. b-booooob...?"

Zack: "I one time kissed this girl's boob so hard that she couldn't come to school for like a week."

Zack: "No, no, no man. What did I tell you about the trains? Girls don't dig trains. They dig mustaches and chains."

Zack: But you and I both know that girls dig a robe worn over a tuxedo.

Dr. Thorpe: Yeah, that's the only way you're gonna kiss a girl's boob, train or no train. Gotta have that robe and bowtie combo. But of course smartard doesn't have to worry about girls, because he's a billionaire from inventing a thing that keeps opened cans of soda from going flat, or something. He's got a gorgeous wife and a dozen kids and a full-scale locomotive in his back yard. And Judo nerd owns a Dairy Queen franchise and does just fine for himself, but he never managed to get that mustache to grow in right.

Zack: That's a great fantasy, but smartard is going to die in a horrible train accident and Judo nerd is going to have his legs and arms amputated and end up rolling around at the parties the jocks in bowties throw.