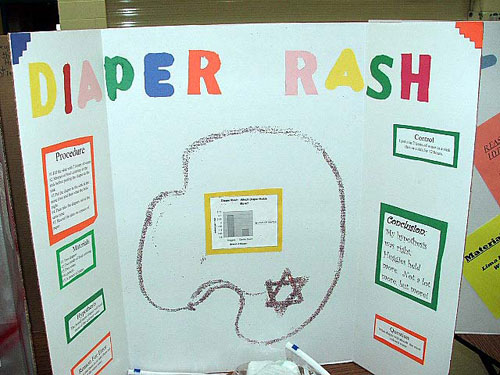 Zack:The Zionists have definitely had their hands in the diaper. Ahhhh, after all that racism and homophobia in the last one it's really nice to head back to the familiar territory of anti-Semitism.

Dr. Thorpe:The left side of that bar graph is "Israeli Military Actions" and the right side is "Use of Baby Wipes," and the label just says "COINCIDENCE?"

Zack:I think he's just reusing his bagel project from last year. He covered up the hole in the center with a snazzy little bar graph. Something about how uncircumcised babies get much more severe diaper rash.

Dr. Thorpe:Yeah, I bet it took him forever to figure out how he was going to work in the Jewish angle. Then he'd already been working for like five hours on stuff about how unleavened bread helps prevent chafing when he realized that he could just stick another picture over the Star of David, but by then it was too late.

Zack:He asked his dad for money for new poster board, but his dad said "Ibrahim, do you have any idea how much paper costs these days? Be a mensch and just glue something over the bagel from last year. You like the Christian babies so much, why not do something about their blood or something."

Dr. Thorpe:Jesus, Zack, want to just deny the Holocaust while you're at it and we'll call it a day? Or did you get all your Holocaust denial out of the way in your new book, My Tank is Fight!, available for preorder now!

Dr. Thorpe:I'll tell you one thing, though: you can trust them with the ass of your baby. They will do it no wrong.