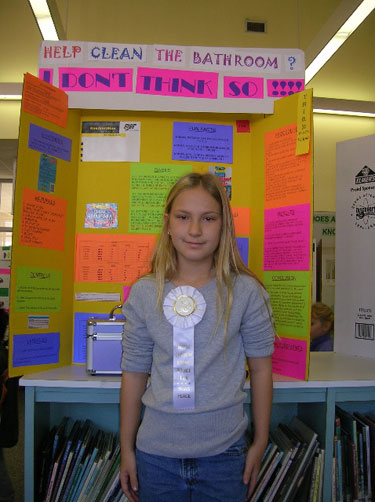 Zack:The white ribbon for "worst work ethic" goes to Leanne Horsely. The blue ribbon went to that girl who just had a cricket in a box from last time.

Dr. Thorpe:"Hmm, I want to do a good science fair project, but I'm basically just a lazy, spoiled little asshole. Wait a minute... maybe I can make that my project!"

Zack:She probably spent more time picking out fonts for her title than she spent on the project itself.

Dr. Thorpe:She'd be the most popular call-in advice show host of all time. "Lazy Lucy, where can I find a job in today's competitive market?" "Get a Job? I DON'T THINK SO!"

Dr. Thorpe:I'm picturing her just slamming the phone down after the first reply. "Lucy, do you want to take another call before the commercial?" "I DON'T THINK SO!"

Zack:All caps and three exclamation points just seem at odds with the idea of being constantly lazy. Although, I guess I can imagine her laying on a couch screaming "I DON'T THINK SO!!!" while staring emotionlessly at that infomercial for the Magic Bullet. "Mixed drinks, cheese dip and fruit smoothies? I DON'T THINK SO!!!"

Dr. Thorpe:Chops onions in three seconds flat right on your home countertop? I DON'T THINK SO!

Zack:This girl is going to grow up and marry that "Do Videogames Affect You?" guy. They're going to have a litter of apathetic and dull children.

Zack:That ribbon looks kind of like it's part of her shirt. I wonder if you would get in trouble for wearing a blue ribbon to the science fair. The same applies to really any contest that hands out ribbons, like attend a Congressional Medal of Honor ceremony wearing a Congressional Medal of Honor. There would be soldiers in wheelchairs and mothers getting their son's posthumous medals and there you are in a Dipset shirt, not shaved in a week, with one around your neck.

Dr. Thorpe:That's barbaric, like showing up at a lobster restaurant already wearing a bib.

Zack:I think it's more like taking candy to the movie theater. Why pay 10 dollars for Reese's Pieces there when you can get them for 99 cents in the gas station? Why lose your legs to an IED in Iraq when you can buy a Chinese replica medal of honor from ebay for five dollars?

Dr. Thorpe:To people like us, who have no dignity, the two are virtually the same.

Zack:Do we have dignity? I DON'T THINK SO!!!

Dr. Thorpe:Do I give a shit what Congress thinks of me? I DON'T THINK SO!!!

Zack:And really, who is Congress to judge honor in the first place? That's like having Dan Brown judge a creative writing contest.

Dr. Thorpe:No, see, that almost kind of makes sense. Really it would be like having a capybara judge a surfing contest. The two are just so entirely unrelated that it boggles the mind.