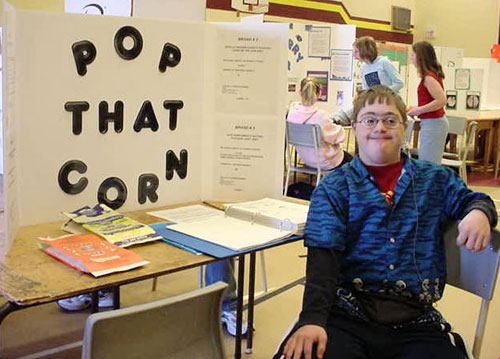 Zack:Oh man, pop that corn, motherfuckers! That is some science, bursting in your face!

Zack:It looks like they put Pop that Corn in the slums of the science fair. Look at that table. He's right next to a science project entitled "Step on that package, cutting WMD for my hoppers."

Dr. Thorpe:"I'll show you how to pop more corn, and the shit that you get back is just as raw."

Zack:"Pops got the white tops, selling Orville on the corner."

Zack:"Got my re-up on the hands-free cell, step on my corner and you finna catch a beatin'."

Dr. Thorpe:Mildewish, I heat it, it turns bluish, moves to a tight wad, the Jiffy Pop is Jewish.

Zack:This kid is top level shit, he runs his lab out of a Discovery Zone over on MLK Boulevard. He don't even handle the product or the money. You want something, you play skeet ball and take your tickets over to Gumby. He fix you up. 3 caps of extra butter and a spider ring, neeyah.

Dr. Thorpe:Man, popcorn is for yuppies and shit. If you want them freebase kernels, them real rocks, you go to this cat. He doesn't cut his shit up with Arm and Hammer and powdered butter, he uses that real movie theater-grade butter syrup.

Zack:Don't trifle with him either, bitches, he got all kinds of terrible tricks up in the fanny pack of his. Some ho tried to snatch and grab when he was checkin' caps and he grab her by the hair and cut her face off with safety scissors. You know how long that takes? Take like an hour.

Zack:Most niggas blast away or maybe hit em with a bat, this nigga is like fuckin Mongolian and shit. He got all beardy and crazy with his shit.

Dr. Thorpe:This crazy Mongol nigga is the Avon Barksdale of the science fair. He runnin this shit.

Zack:Nigga he like Avon Barksdale crossed with Omar. He straight run what his and straight take what yours. No matter to this nigga.

Dr. Thorpe:If you need some crazy shit done, this nigga is always down.

Dr. Thorpe:Downier than a dryer sheet, but he'll get that corn poppin' like fireworks, so don't test him.

Zack:He open a bottle of champagne and everybody duckin' and weavin' and shit. He just stick that chin out there and talk about his shoes.

Dr. Thorpe:Motherfucker will straight up piss on a ho while he's still wearin' his pants. And the ho ain't even in the room.

Zack:Respect don't even enter into it. He stone cold crazy. He just stare at a wall and laugh like it's tellin' jokes and he so real you start believin' it was.