Why Visit FAKE Las Vegas and Not Somewhere Like Las Vegas or Akron, Ohio? 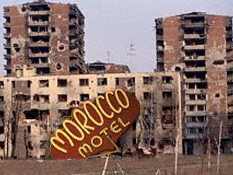 A current photo of Las Vegas. Do you want your children visiting a place like this?

More often than not, one of the first questions asked by our "test victims" after we have removed the ball gag and blindfold is, "FAKE Las Vegas? Why FAKE Las Vegas?" This is an easy question to answer: because the real Las Vegas simply isn't getting the job done. Let's examine the history of Las Vegas so we may learn why FAKE Las Vegas is the superior choice.

The Birth - Las Vegas: Las Vegas was discovered in December of 1829 by Rafael Rivera, an eighteen year old Mexican Scout with the Antonio Armijo Trading Caravan out of abiquiu, New Mexico. The Armijo party was attempting to discover a new trade route from Santa Fe, New Mexico to Los Angeles, California. As we can plainly see, even the founding of Las Vegas was a mistake. Some Mexican guy just wanted to get from New Mexico to Los Angeles and he stumbled upon a filthy plot of land which he thought would be a good place to stack a bunch of filthy hotels and casinos on. That, my friend, is poor planning from the start, unlike FAKE Las Vegas!

The Birth - FAKE Las Vegas: Famed intellectual and humanitarian Carl "The Duke" Winchester passed out while driving south on the I-15 in September of 1997. After waking up approximately four hours later in a drainage ditch, Carl realized that the desert area outside Las Vegas was an untapped potential revenue source which could be developed into an entertainment mecca or possible landfill. Since Carl was armed at the time, nobody chose to disagree with him.

The Purchase of Land - Las Vegas: At the time of Rivera's discovery, the territory of Nevada was still a part of Mexico. On February 2, 1848, as a result of the Treaty of Guadalupe Hidalgo, Mexico ceded to the United States present day Nevada, Utah, California, Arizona, Western Colorado and New Mexico for the sum of $15 Million. There is even today great controversy and debate as to the questionable, and perhaps unethical political means, the United States used to acquire this vast territory from Mexico. A few Spanish land grants still survive today, and Hispanic land grant heirs still argue the United States should be forced to honor land rights they were promised in the 1848 Treaty of Guadalupe Hidalgo, which ended the Mexican War. Did you read that? Thanks to such nefarious governmental purchasing tactics, scholars are still unsure as to who legally owns Las Vegas! This means that if you go to sleep in one of Las Vegas' many hotels, you could wake up the next morning with hundreds of Mexicans in your hotel room claiming ownership of the establishment and property! And your kids too! Who knows what vile plans they have for your children! Probably something involving paella! Plus you've just got to wonder about a contract dubbed the "Treaty of Guadalupe Hidalgo", which is also the name of a enchilada entree dish at all Acapulco restaurants.

The Purchase of Land - FAKE Las Vegas: The five-square mile plot of land purchased for FAKE Las Vegas was bought for 19 dollars by Carl Winchester. He was able to secure the purchase by promising the native American Indian tribe who originally owned the land an unspecified percentage of profit and two free agents to be named later. You can be sure that when vacationing in FAKE Las Vegas, you'll never awaken in a room full of hostile Mexicans, unless you originally went to sleep with them in the room. Hostile scorpions perhaps, but never hostile Mexicans.

Government Influence - Las Vegas: In the 1950's, the State of Nevada established a State Gaming Commission and began regulating the Las Vegas gaming industry as never before anywhere in this country. In Las Vegas, the State 's efforts were supported by independent local controls. Some of the effective methods used in Las Vegas to regulate gaming were zoning and land use controls, Liquor and gaming licensing code regulations, and building and fire codes that today include building and fire safety provisions which are considered among the toughest in the World. Building and safety provisions? What a joke! FAKE Las Vegas cuts through all this red tape mumbo jumbo by regulating ourselves and avoiding all government interaction. For example, instead of stealing rotting plywood from an abandoned railyard to construct the "FAKE Las Vegas Gamblin' Barn", we chose to adopt a more responsible and safe building code: we stole the rotting plywood from the dumpster of a local Home Depot. This eliminates a lot of the overhead cost and passes the savings onto you, the consumer!

Government Influence - FAKE Las Vegas: As mentioned, FAKE Las Vegas is free of the government's meglomaniacal hand (and the other government's meglomaniacal body parts as well). In fact, we have recently instituted a strict "No Governmental Employee" policy which allows us to aim powerful sniper rifles at anybody who suspiciously resembles a government agent. For your own safety, please don't approach FAKE Las Vegas in a vehicle with tinted windows or unmarked license plates, unless you think it's one of those days when you're semi-solid and objects can pass through you.

Attractions - Las Vegas: With an average of 310 days of sunshine each year and mild average temperatures, Las Vegans have a number of opportunities to enjoy outdoor recreation. Las Vegas has 27 major golf courses and a AAA Baseball Team in the Pacific Coast League. Las Vegas is also the "Boxing Capital of the World" and each year plays host to some of the biggest fights held in each weight division, many of which are held out doors. A triple-A baseball team? Whoopdy doo. There are Special Olympics kids who can hit better than some hack AAA team full of washed up former major league players busted for snorting a few pounds of cocaine through a drinking straw. As for Las Vegas being the "Boxing Capital of the World", that's bullcrap too. FAKE Las Vegas features over 194 fights a day, most of which are even between the casino's own employees! If you're looking for some hot boxing action, FAKE Las Vegas has it all, from drunken brawls to inebriated slugfests, intoxicated fisticuffs, and booze induced scuffles! Bystanders are even encouraged to participate, often receiving a suggestive "combat boot to the face" to let them know their personal interaction would be appreciated. Although broken beer bottles are not required, they are recommended.

Attractions - FAKE Las Vegas: Forget all those crappy halfassed baseball teams and legalized boxing matches, FAKE Las Vegas has all the real entertainment people are looking for, ranging from celebrity impersonator impersonators to exciting new gambling opportunities like the world-famous "Jack Pot" toilet bowls. There's always plenty of exciting activities to do and see for people of all ages in FAKE Las Vegas, assuming they all share similar interests!