Not Every Halloween Effigy is About YOU, Steve 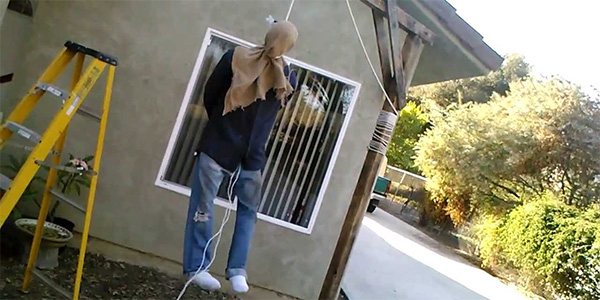 Yes, I've received the letters you've sent--all thirteen of them. How could I have missed these messages when they've been sitting on top of my newspaper every morning for the past two weeks? Tampering with home deliveries is a federal offense, Steve, something I never assumed a guy like you would stoop to over something so petty. On that note, you ever hear the thing about catching more flies with honey? The way these letters gradually increase in severity as they pile up? Not the best way to negotiate. And I'm sure the "lawyer" you keep mentioning in some of these later threats would agree with me.

So, let's get down to business. That "hanging man" Halloween decoration I've had up since the first? Totally not an effigy of you. But I can see how someone so quick to anger would think otherwise, Steve. Yes, every day I dress him in one of the 12 pairs of clothes you regularly wear to your 9-to-5 at PharmTech--all of which are garments I've purchased myself, regardless of your claims of laundry theft. Yes, I've gone to great lengths to see that he matches your size and posture perfectly. And the sign I've installed that bears the name "Steve" and points directly at him? Sure, someone who hits the bottle as often as you do, in a drunken haze, could imagine this plastic mannequin body as his own. But you know who hasn't contacted me multiple times about this festive lawn installation? Film director Steven Spielberg. That's right, Steve, there's more than one person with your first name. Surprising, I know. There's lots of things happening outside of that bottle you crawl into every night.

I'll let you in on something, Steve--something those with senses dulled by the corporate world are likely to miss. There's a little something called "character development" out there you may neglect while peering beyond your front window through the fog of yet another hangover. Steve, what would happen if our Halloween decorations came to life at night, in the manner of the popular movie Toy Story? Why, I'd bet they'd envy we privileged humans, who can prance in the sun--or in your case, drink in the sun, as I've seen you do multiple times at that wet bar you installed on your back patio. While you're knocking back a few rounds with the boys, Steve here only wants the same companionship and thoroughly average wife you take for granted.

Of course, I'll have to take Steve's word for it, because the real Steve (you) has never once offered an invitation since that backyard attraction of yours was installed on July 23rd. Are you listening to The Eagles' greatest hits, or some of their deep cuts? All me and Steve hear from HQ are the muffled sounds of revelry and bad neighbordom. Are you out there drinking crisp wheat beers, or bitter IPAs? All I can do is fill in the blanks myself as Steve and me spend yet another lonely Sunday cracking open some Miller Lites--and drinking responsibly. Something I'd be able to teach you if I was ever given a simple invitation. I can only assume that, without me, you and these so-called "work buddies" end every weekend night by projectile vomiting and screaming racial epithets at your clearly white and average wives.

But you know what, Steve? Old Steve here is a better friend than you've ever been. I haven't lived next to him for eight years, for instance, but he never put up a fuss when I accidentally ripped off his jeans with the leaf-sucker. And if--like some people I know--I accidentally backed over his son, I'm sure he'd chalk it up to fate rather than a failing of personal responsibility. And, on that note, Steve, maybe you won't feel so singled out if I add another effigy to my little Halloween family out in the front yard. In fact, I think Steve would be happy if he had his own Little Steve to join him in his dangling. It might be hard to find a child mannequin with amputated legs, but lord knows I have my connections. And if you should find any of Steve Junior's garments missing from your clothesline, don't call the police: Getting the authorities involved will just let that local gang of laundry bandits know they've won.