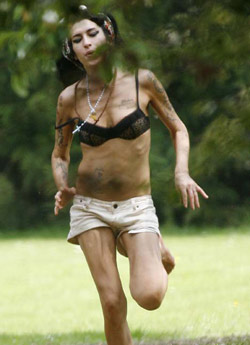 And they're on about me being racist. Racist this and racist that. Put diamonds on your mobile in the shape of a swastika and suddenly you're a Nazi. The Nazis didn't even have one mobile between the whole lot of them, so what do they care if I put their symbol on my phone? Everyone is so political correct now.

It isn't about the blacks. I know a black and he is not very scary at all. It's about the gooks. Filthy creatures. Little goblins, they are, with their little blips and blops. Wouldn't trust them to stand under my tires. Get into everything and louse it all up. Smell terrible on top of it all. Like maybe what a octopus bone would smell like if it had one.

Now the tabloids and the Internet are going on about me being diagnosed with some lung spots or polyps or something. Something on an X-ray.

How do you even know those are real? If a man comes up to you on the street and says he can see inside you if you stand in front of a box, you wouldn't believe him. But some mattress biter in a white coat working for NHS can take pictures of something that doesn't even look like me a bit and say I have to stop smoking.

No, you stop smoking! I have these things. I do them! Deal with it! Get over yourself.

Pete thinks I should get a tattoo on my face that says FUCK OFF to ruin all of the tabloid pictures. It's great. He has the best ideas. Sometimes I have to bite his nose or claw his eyelids, but he was the one who said I should try to inject antifreeze into my cat. I told him Mr. Pinkie was feeling sad because mommy isn't around enough and so we injected him in the head with antifreeze and it works. It works, trust me.

I get all my pets high. I think that is crucial to a relationship. And everyone that knows me knows I love my animals. 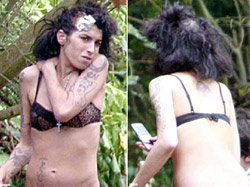 If a parrot can't smoke crack itself you put it in a Pringle can and you just blow your crack smoke right in there and put the lid on. It comes out off its tits talking all kinds of nonsense. A Dachshund won't fit in a Pringle can though. You think they're a sausage but they've got legs and its near impossible to put them back on.

I am seriously thinking about straightening out my life. Not for the tabloids but for me. It's just so much work being this high. I could cut back to eight or nine rocks, a few bags of meth, one pack of those heroin plasters the Jamaican black sells me. That should be a reasonable amount.

Sometimes, I admit it, I get a little out of control. I'm just a perfectionist I guess. If I'm going to do drugs I want to do them right. Right?

I did so many drugs one night some bones started to come out of my legs around my hole. I don't know what for, I pushed them back in and put tape on them. I think they stayed in there or fell out when I was asleep. And to hell with what the fat cunts at The Sun write about me. They don't even know how to properly shoot heroin between their toes.