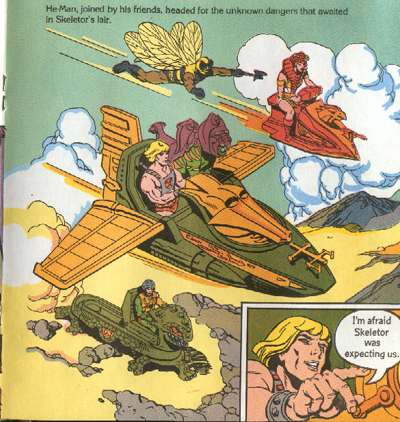 He-Man and his buddies decide to board their various vehicles (some assembly required) so they can take the opportunity to remind their target demographic that yes, they do have He-Man vehicle toys for purchase. He-Man voices some concern that Skeletor might be expecting them, which is odd because He-Man and his buddies are the only people that EVER visit Skeletor (except for the UPS man who brings him his "Useless Gadget of the Week" delivery). 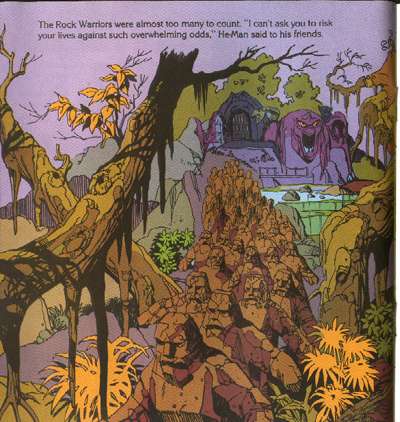 Upon nearing Skeletor's evil fortress, He-Man notices a few billion Rock Warriors lumbering from the castle, which undoubtedly supports Skeletor's previous threat of the previous battle being "just the beginning." He-Man generously tells his compatriots that they don't need to risk their lives against such "overwhelming odds", which is his way of saying, "listen guys, you'll just fuck things up. Teela, go home and make yourself pretty, Man-at-Arms, go back and make me some kind of nonviolent gun which freezes Skeletor's minions, and Buzz-Off, well, just go kill yourself." Of course it'd be easier to just shoot the Rock Warriors from the sky and drop bombs on them, but Eternia isn't exactly the logic capitol of space.