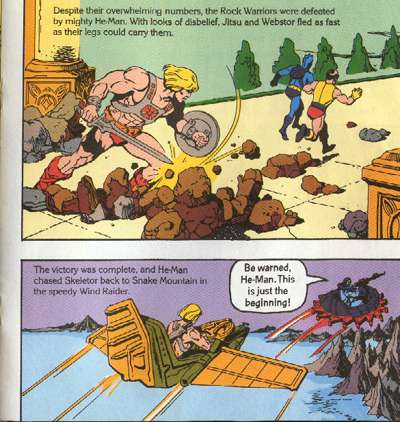 He-Man surprisingly (yeah right) manages to defeat the army of Rock Warriors, causing Jitsu and the equally moronic Webstor to run away. I have no idea why they were even there in the first place. I think Skeletor just didn't want the two imbeciles hanging off his gravity-defying plastic ninja star of failure while he flew it around and shouted insults at the people of Eternia. He-Man chases the nasty ol' Skeletor back to Snake Mountain, and Skeletor pulls another boneheaded move by warning He-Man of what lies ahead.

Now I'm no master strategist like He-Man or Vince Lombardi, but I would guess telling your enemy that you're going to attack them isn't exactly the brightest idea in the playbook of evil. In fact, I can think of at least three better things to say to He-Man which wouldn't give away your secret battle plans for the future.

While Skeletor may or may not know of He-Man's medical condition, hinting that he may have a deadly disease will most assuredly throw He-Man off his case for a while. This tactic is known as "the ol' switcharoo", although it really isn't. I just can't think of a better name for it right now and frankly I don't really care to.

Reverse Psychology, while aimed more towards grade school students and people with an IQ in the mid-teens, could probably work very effectively on most citizens of Eternia, including He-Man. If Skeletor were to use this line, I'd bet all the money in the world that He-Man would return to Grayskull and just kick back while NOT worrying about Skeletor producing more Rock Warriors.

Psychological warfare would probably work very well, as He-Man would suddenly have second thoughts before ever mounting Cringer again. Not like he shouldn't have been worrying about this in the first place. 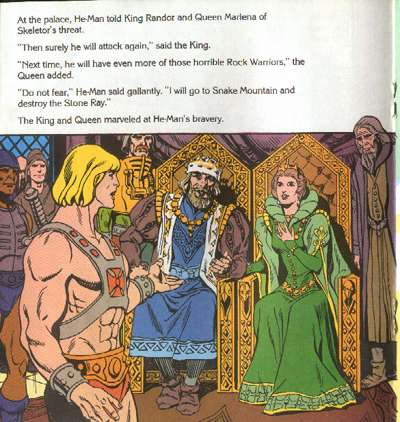 Instead of continuing his pursuit of Skeletor, He-Man decides to return and brag about his bravado in the whole "He-Man versus the Rock Guys" battle which took place about 20 feet outside of the room that the King and Queen were sitting in all along. Of course the royalty had no clue that the battle even took place, as they were too busy sitting in their chair and staring straight forward, which seems to be the only activity they ever do in this damn cartoon. I suppose it's safer than actually leaving the palace and running the risk of being killed by falling precious metals, so I don't really blame them.