Welcome once again to State Og, where our specialized team of scientists who suffer from short term memory loss manage to find a cure for their illness daily, providing us with laughs-a-plenty. Thanks this week go to: Brett "Nimmo" Hurban (saw Star Wars 81 times), Michael "Slash And Burn" Hollenbeck (wears Chewbacca pajamas in public), Ian "Kill Maestro" Hill (tried to kiss his sister, only to discover he still had no force powers), Aaron "Elcybergoth" Young (believes Greedo was shot by a man on a grassy knoll), and Jason "Vengeance Otter" Johnson (saw a commercial for Star Trek once).

This is Og Country!

Have you ever wanted to shoot someone in the head? Have you ever felt like starting a smuggling ring for the short term, with no risk involved? Do you have the need to pierce people's ears without their permission? Of course you do, you are only human. But some crazy, bland people have created laws to prevent you from acting out your God given rights.

State Og has recently purchased its own island, as those of you who we have thrown off of it know, and we have claimed sovereignty. Ogtopia is born, and may have its named changed to something less retarded as soon as we feel like wasting time thinking of a better name. This is our first "official" country, and because of this we are allowed to send forth diplomats around the world.

If you would like to spend your days promoting world peace, and your nights selling illegal arms, then please call your local travel agent and ask to be reserved a space on our chartered cruise to Ogtopia so that we can meet with you and show you around your new hideout....er, home. 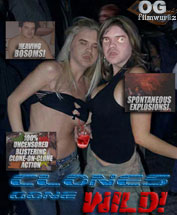 While various competitors and UFO cults have been trying and failing miserably to perfect the art of making clones, we've been pumping them out by the truckload and filming their sexy hijinks. We haven't perfected it either, but we just don't care, because these bad girls and their bad DNA are taking the world by storm!

Containing over three uncensored hours of out-of-control clones, Clones Gone Wild is a non-stop sexual thrill ride stopping to show all in New Orleans, get wet & wild in Cancun, eat passers-by in Salt Lake City and explode in Fort Lauderdale, with special bonus footage of completely nude clones clawing their way from gestation tanks without any clothes on at all! 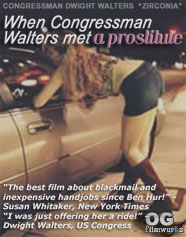 When Congressman Walters Met a Prostitute

A touching tale of love lost, regained, lost again and then briefly regained in an alleyway for the low, low price of twenty dollars, When Congressman Walters met a Prostitute is the feel-good film of the season and a sure-fire favorite for divorce lawyers and impeachment committees coast to coast!

When Congressman Walters met a Prostitute is coming soon to a sleazy news outlet near you, unless he brings $50,000 in small nonsequential bills to the lavatory of the Third Street Greyhound station by midnight next Thursday and doesn't go blabbing to the police.

Also slated for release this spring:

Mr. Bubble's Fantastic Adventure - the touching tale of an adorable puppy's epic journey across America in these complex modern times, facing danger and hardship to return to the laboratory he was kidnapped from by heartless ecoterrorists.

Rotting to the Oldies Vol. III - a low-impact workout for the heatlth-conscious corpse in these comple modern times. Led by lovable Earl, onetime State Og accounting whiz turned undead fitness guru by the terrible secrets of reanimation technology, this is the workout for you if you have recently died or are a hippy. Die fast, decay slow, and leave a fit, trim corpse!

So pull up that barrel of popcorn, jam in that cola IV and settle your ass in your suffering sofa, because State Og never stops pumping out the hits and you never start having standards. Viddy well, America!

Censored Correspondence From the Frontlines

A quick note before I tell you about the newest amazing product and mega-deal that will most likely burrow a hole into your head and lay eggs in your brain: Since the onset of the war, the State Og CEO wanted to protect his freedom to sell you shoddy electrical goods, so he conscripted his most worthy employees, including me, to go fight Saddam Bin Saddam. I now write this update from the front-line of Iraq, where communications back home to our sweethearts are censored in some bizarre practise adopted from World War One, when it stopped randy young men writing home with information about how many prostitutes they slept with in a hedge in Bordeaux. Of course I'd never be lucky enough to see any action, but unfortunately this censorship does stop me telling you about HOW MUCH I LOVE MY COUNTRY and how the army ARE KEEPING AMERICA SECURE and how the country of FREEDOM has tampered with the FREEDOM fries we're being given to eat. In short; I'm having to LIVE LIKE A PRINCE on dog food and sand. I call it "Dog Fand" and it'll be on your shelves soon!

Also on shelves at the end of next week! It's the world's most erotic eveningwear for the refined gentleman. We call it the "Karma Suit-ra" and we guarantee you'll have to beat off attractive women with the end of a rifle. Fashioned out of 100% velvet by an Italian porn-baron, this charming tuxedo features a peek-a-boo shirt and crotch, velcro sides for easy removal, a tiny, tiny thong and for a extra fee, a foot-servant to follow you round in pubic and bark at you like he was a dog chasing a fox. Any self-styled Romeo will love the feel of the Karma Suit-ra and the attention it brings.

Anyway, I've got to run, one of the guys says they've got me a date with a MILITARY TRIBUNAL and for 5 American Dollars I'm going to get the best damn COURT-MARTIAL I've ever had!

State Og's upper management and 16th level wizards would like to congratulate all the employees who helped make our annual nationwide pep rally such a roaring success! It takes real team spirit to sit through all five hours of speeches and public executions, constantly being prompted to applaud by electric shocks to the ass. This year 58% of you had enough team spirit, our best percentage yet!

After the hoopla it was time for the team building exercise: the foosball tournament! Area managers from each regional office selected teams from their staff, and then had enormous steel rods shoved through their abdomens. With the managers spinning their employees around on the rods, flailing legs kicking at the ball, everybody learned a lot about the value of teamwork and the relationship between employer and employee. Namely, your boss is your only God, and it is in your best interest to remember that. Despite an incident where one of the forwards managed to tear most of himself free and sort of flop toward the exit, the tournament went well.

In the end, Nathan Lee and the Fargo office took home first place. Mr. Lee credited his team's devotion, tenacity and quickly stiffening limbs for the win. He also took the opportunity to mention that there are several job openings in his office. That's Nathan Lee, always working!

Our market researchers work around the clock to determine how to improve your lives. The number one recommendation is to stop calling in the middle of the night to do market research, but we aren't about to give up on that sweet pie. However, the second most popular idea is to liven up your household pets somewhat, and that sounds like something Og can help out with!

At State Og, we understand how the average pet owner can grow tired of the everyday pet. Look at your typical dog. All they do is run around the house naked, eat from a bowl on the floor and crap all over everything; all things you already do yourself! With the opening of the State Og Pet Enhancement and Hotel Management Training Center you can now spruce up that tired, run-of-the-mill pooch! Our talented and dedicated team of mad scientists and erotic performance artists can custom build new and exciting features into your existing pets! Some of your options include:

Rearranging / removing the internal organs of your puppy and adding a zipper, effectively transforming that adorable little guy into a living handbag. Now that's accessorizing!

Grafting a pair of fully functional human arms onto your goldfish. Now the stupid thing can feed itself when you go on vacation!

Mounting full size Howitzer artillery on the back of your tomcat. Not only does this make for interesting conversation but your kitty will be able to explode the ass off of anything that gets in it's way.

A spoiler. Not only does it look great on any animal, but it's also almost guaranteed to increase its top speed!

These upgrades and more are available today at the State Og Pet Enhancement and Hotel Management Training Center! Don't you owe it to yourself make sure your pet is the top of the line?

Mad Scientists Are Our Friends

Dr. Koch is a highly qualified individual with no fewer than four PhDs and best of all he possesses an unconventional sense of creativity--what other people have described as being “fucking crazy.” We have evidence to prove that these people are wrong, and that this scientist is perfectly sane, but honestly that evidence is purely fake and forged, just like Dr. Koch’s degrees. Nonetheless, we are impressed with his body of scientific work.

On the academic research side, Dr. Koch’s best known study involved a dog (beagle), which he dressed up with a scarf and aviator goggles. Dr. Koch fastened the dog onto the top of a doghouse in a sitting position, with a special harness. Afterwards, the dog and his house were placed on a catapult which was capable of launching them into air to the height of a twelve-story building. Dr. Koch then launched the catapult’s load as it was pointed at a fourteen-story building. As the subject of his experiment slide down the building’s side, Dr. Koch started chanting, “Take that Bitch von Richthofen!” While the rest of the scientific community appears to be skeptical regarding what Dr. Koch calls his “atomic super collider”, we have confidence in his genius and we think after the world sees his next project --the construction of a garlic press in space large enough to crush the earth-- everyone will be impressed.