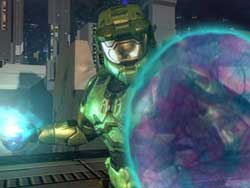 Bungie: "You're angry that Halo 3 only runs in 640p? You're lucky it's in color!"There has been a lot of controversy over the fact that the game is rendered in 640p rather than 720p, the high-definition threshold, so it's not true HD. According to some, Microsoft should issue an apology, change their labeling, and repent to Jesus Christ. Bungie's response to the controversy is that yes, it runs in 640p and anyone who cares about this is a big poo-poo head.

I don't think anything else is going to come from this since Halo 3 is published by the same company that releases Streets of Rage on Xbox Live Arcade with graphics equivalent to an emulator with a 2x Sai Super-Duper Eagle filter and calls it "HD". In any case, I don't want to be labeled as a poo-poo head so I'll just leave it at that.

Despite that setback, Halo 3 looks good sometimes and bad at other times. For all intents and purposes it's a "high-def" Halo 2 with a decent lighting engine. Environments range from bland to pretty cool, though nothing will appear and wow you. Gears of War, Project Gotham Racing 4, and even Condemned look better. But then again, the Halo series has always had a definitive look. It doesn't have to be photorealistic. As long as it looks like Halo then the fans are happy.

In terms of sound, well, the game has sound.

In the end, Halo 3's biggest problem becomes apparent when you read a Halo 2 review right after playing Halo 3. Everything said about the first game pretty much rings true about the third, right down to the complaints. I was going to copy and paste a bunch of Halo 2 reviews together and call it my Halo 3 review had they not made me sign an academic honestly policy. 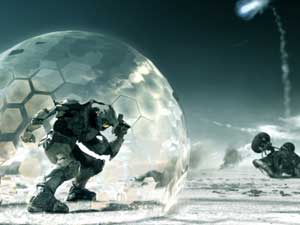 We paid $59.99 for a bubble shield.Halo 3 is more like Halo 2.5 or Halo 2.733333333 or some other number between 2 and 3. There's nothing new here. Well, that's not true. They added a bubble shield but it's kind of worthless because all your enemy is going to do is walk in and pistol whip you.

The truth is that we bought the same game twice. Of course, we've been doing that for years so it's nothing new. It's like Microsoft and Bungie saw the sequels and remakes from Capcom and Nintendo and said, "Me too!"

Who is to blame for this slightly above-average game? Well, us. We bought it even if we weren't that into Halo. We just wanted to be a part of this grand event. Then we justified our purchase by saying it's not that bad. Then we sit there and say, "Fuck Microsoft! We got screwed! I'm never buying another Halo ever again!" The only message the developer ever receives is attached to a check with a hundred billion dollars with an incentive to make more of these stupid games.

Now I'm not saying you shouldn't have purchased Halo 3. In fact it's good that you did. Think about it, if people stopped buying the inferior crap that the company you work for makes, then you wouldn't have a job. In fact, if people were smarter with their money then our entire economy would collapse. Halo 3 might have single-handedly saved us from a recession.

If not for Halo 3 a shifty Hitler-type might have taken advantage of our poor economy to seize power and put all minorities in concentration camps and there would be nobody to play Madden on Live with. As long as we keep on buying the same games over and over again, everything is going to be okay.

Anyway, when the hell is Super Street Fighter II Turbo HD coming out? I can't wait for that one.