When you buy an Xbox Live starter kit a headset is included in the box and the ability to act like an asshole is literally thrust upon you. The problem with Live is that everybody who is using voice chat should probably just sit there and be quiet, and those that aren't should get over their fear of getting called a whore for so rudely interrupting the match and telling their teammates where their flag went. Yeah, there are people on Live who bark out relevant orders that aren't "stick (blank) up your ass" and lead their team to victory, but they are drowned out by Mrs. Thompson's 3rd period English class. 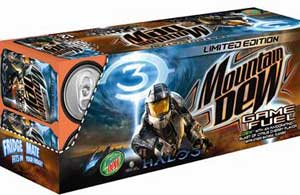 Just as your car needs fuel to move gamers need fuel too. Your ass doesn't widen itself.PC games have voice chat as well and there aren't nearly as many race wars in say, Team Fortress 2, as there are in Halo 3 matches, much to my disappointment. That's because it's too much of a pain in the ass to actually get voice chat up and running on PC games. You have to go out and choose a microphone or headset to buy and learn how to use it with the game. Someone who actually does that is more inclined to use voice chat to benefit himself and his team and is also an incredible nerd.

Xbox Live players put little value on voice chat so it's abused. If Xbox Live headsets could only be purchased separately from an Xbox Live subscription or Bill Gates personally administered spankings to problem users, there wouldn't be as many problems.

If the multiplayer is the steak and the potato is the disc or whatever I said, then the multiplayer options are the Bloomin' Onion. You don't understand what the big deal is at first but as you dive deeper you realize its full potential and you are actually, God forbid, enjoying yourself.

Any part of the game can be customized beyond the default gametypes, which include capture the flag, domination, and king of the hill. From there you can tweak the settings to create new game variants. You can even share your custom gametypes with the Xbox Live Community. There are already hundreds to choose from such as "nigga stfu", "nigga u a fagget cocksucker", and "Pirate Ships".

The best part of Halo 3's interface is that it's set up in such a way that every game mode can be taken online, from single player to multiplayer, even theater mode, though I can't see why you would do that but okay it's there. You can join DBZSlayer88's theater mode match and watch him personally screen his latest film clip where he killed a guy once.

Co-op is a blast if only to play through the game with a friend and make fun of how bad it is MST3K style. Unfortunately they don't have a cooperative options menu. Setting the controller sensitivity would be much more fun with three other guys. 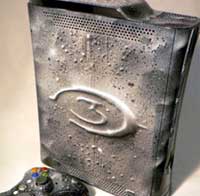 Page 2 felt like it didn't have enough pictures on it so here's a Halo 3 casemod that looks like it was made with mold.If only the interface had been built for a better game. Halo 3's gameplay is pretty much like that time I was at the skating rink and a guy came in and shot the place up while riding an ATV. Goldeneye controlled better than this. That one first-person-shooter parody sequence in Conker's Bad Fur Day controlled better than this.

The weapons feel like toys and don't have the responsiveness or feedback of a game like Half-Life 2. Despite the fact that it supposedly takes place on Earth, you can jump 40 feet into the air and float down like a feather. It seems like the controller sensitivity has two settings, too damn fast or too damn slow.

Of course, it's still fun. I mean, you shoot at people and blow shit up. All the first-person-shooter basics are there, but the core gameplay mechanics seem off. It just might be one of those love it or hate it things. Then there's the keyboard/mouse vs. controller debate, but people who care about that are goddamn nuts.