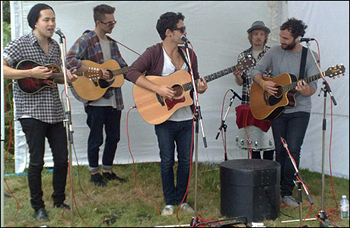 Local Natives has a song called 'World News,' picture these guys singing a song with that title to get a grimly accurate feel for what they sound like.

12. Yeasayer: Odd Blood
For some reason my heart sinks low and I want to ram the Complete Authored Works of Aldous Huxley on Kindle up my tightly clenched buttocks whenever I hear the word 'Yeasayer'. Rule Number 3,147 of Music Criticism: Tears For Fears were fucking CRAP first time around, and they're fucking CRAP now! Jesus.

13. The New Pornographers: Together
Ah, the Traveling Wilburys of indie rock. We meet again.

14. Flying Lotus: Cosmogramma
Ah, the obligatory non-indie record in the Top 20 - so NPR's listeners are open-minded after all. Oh, no, wait, that's not Thom Yorke I see lolloping over the horizon, eager to add his unshaven whine to the squiggly electro beats? Oh fucking fuck, it is.

15. She & Him: Volume Two
The best album in this list, by some distance - and mainly because Zooey Toothpaste-flavour is quite adept at imitating her favourite old school singer of choice (Doris Day, Nancy Sinatra) and acting all cute and getting away with it because she is all cute, sigh, blush. And, of course, collaborator Portland's M. Ward is seventy squidillion times more imaginative and talented and in tune with old-school transistor radios than all his contemporaries put together (Conor Oberst, I'm looking at you). She & Him know when to start a song. She & Him know when to stop a song. It's a supremely simple trick that pretty much every other band on this list could benefit from learning. 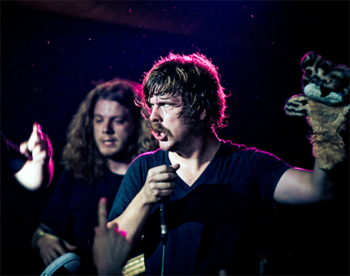 This is Horse The Band, not Band of Horses. You wouldn't like their music, either, but at least you'd have a fuckload more fun at their show.

16. Band of Horses: Infinite Arms
Band Of Horses? Pack of cunts, more like.

17. Jónsi: Go
The dude from Sigur Rós makes a solo record that's a bit more interesting than his main band's music, which is kind of like contrasting paint drying with grass growing. It's a mash-up! It's a flurry of emotion and softly-spun vocals! It's a mess. Man, Thom Yorke and the dude from Sigur Rós ... these NPR listeners are really expanding their listening habits this year, aren't they?

18. The Knife: Tomorrow, In A Year
Demented electro group makes concept album based around the life of Charles Darwin - a ring-cycle, basement grinding and buzzing, mezzo-sopranos singing full over reverb violas - and confuses the fuck out of everyone in the process. At least The Residents were being funny when they made Eskimo. So NPR's listeners have actually heard - and enjoyed - this record, have they? They're one up on the rest of us.

20. Sharon Jones and the Dap Kings: I Learned The Hard Way
I love Sharon Jones personally - as does Isaac (see Number 1 in this list, above): We both were to be seen dancing to her fine, hard-edged voice at the Falls Festival in Victoria last year. And The Dap Kings sure rule the roost. And I know that this sure ain't any more revivalist than The National (say) or Pack Of Cunts. But it still feels weird to have something as duly reverential of the past as this on a list of 'new' music but ... (shrugs) ... at least Sharon Jones can fucking SING.

Everett True writes about music he likes at this site.