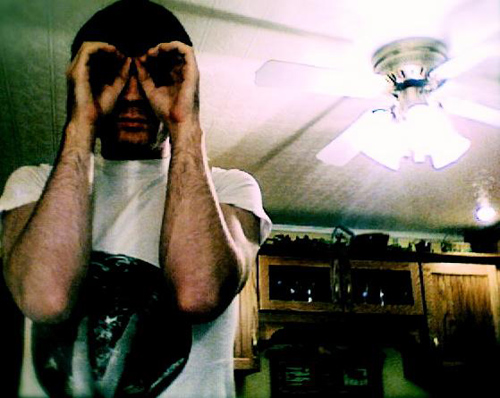 ocean eyes begins with "Please take a good hard look at your textbook 'cuz I'm history," a dire miscarriage of wordplay that gives listeners fair warning to abandon the album immediately. Later in this same song, called "Cave In," Adam Young (Owl City's 23-year-old sole member) sings "every mushroom cloud has a silver lining," which his fans describe as "deep" and "chilling" instead of the more accurate "fucking retarded." He's apparently suggesting his infantile optimism would survive even nuclear war, and that he'd be clapping his hands and singing "da da da" while skipping over radiation-scorched corpses. Actually, I guess that is pretty "chilling."

Musically, "Cave In" promises R&B during its opening "wee-ooh" synthesizer hook, then subtracts everything anybody likes about R&B, including soulful vocals, funky rhythms, and the peace of mind inherent in believing the genre bereft of pasty, whiny jerks who sing stuff like "tie my handlebars to the stars."

"The Bird and the Worm" plays like a straight-to-DVD Little Mermaid sequel written by Diablo Cody: "For all my pals who live in the oceans and seas, with fronds like these, who needs anemones?" Cody's talking crab would deliver that line with ironic detachment, a twinge of pride at the alleged cleverness tempered with "yeah, I meant that to be lame" insecurity, whereas Young delivers it with a guileless smile, like he's seriously too dumb to know any better.

"Dental Care" contains more wretched punnery ("I've been to the dentist a thousand times/so I know the drill") and embarrassingly sincere positivity ("I'd rather pick flowers instead of fights"). On the bright side, now Owl City fans have a song to hum while they're wetting their pants in the dentist's chair. I assume ocean eyes actually causes tooth decay, due to its insufferable sugariness and/or the enamel-stripping effects of the repeated vomiting it induces.

Owl City fans claim they listen to ocean eyes to cheer them up when they're down. I assume they're speaking theoretically, having no significant problems of their own, because if I'm facing some tragic circumstance, the last thing I want to hear about is some pansy fox-trotting with fireflies. Conversely, if I were in one of my rare good moods, I wouldn't want to hear Owl City, because it would make me despondent about bad music and the idiots that encourage it. If you enjoy Owl City, your intellect must be so morbidly atrophied that if you had even a vague sense of its sorry state, all the obnoxious kids-video-game-sounding disco songs in the world couldn't cure your depression.