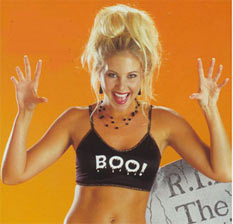 Okay, we can make an exception for some ghosts. No need going off half-cocked and destroying allllll monsters.Overview: Most of you know that when we die our souls depart this mortal coil to the realm of Valhalla where we celebrate our lives as warrior at long banquet tables day in and day out. Sometimes when a warrior dies in the midst of battle he feels unfulfilled and is doomed to wander the earth tormenting the living. This is usually accomplished by emerging from walls, making objects levitate, moaning from inside walls, appearing on film as translucent dots, and appearing in mansions full of really crappy puzzles. Because of their insubstantial nature ghosts can take on a number of forms. This means that it can be difficult to recognize the same ghost seen a second time, which raises the question of tagging ghosts in the wild. Since most bullets and tracking devices will simply pass through ghosts the best method for tagging them is to carve identifying marks into their head or chest with a magical dagger, usually after subduing them with some form of warding circle.

Danger Posed: Ghosts only rarely pose a physical threat to those in their immediate vicinity and even this is usually an indirect result of panicked behavior in the face of their spooky antics. Much more frequently they just turn your life into shit by being total freeloaders on your valued property. They'll float around through any wall at any time of day or night, levitate your books like they own them, leave ectoplasm all over the fucking place, and bleed out of your electrical sockets whenever they feel like it. If you tell them to get off their ass and earn their keep they'll float up into the attic and sulk for a couple days with those goddamn chains. They're just a serious pain to have around, especially the Indian warriors from the burial ground you built your pool on top of. They will just stand over your bed and point accusingly at you for hours on end and believe me, if you had trouble jerking off in front of the cat imagine how bad it's going to be with some Sioux warrior with two centuries of betrayal in his eyes. No matter how loud you turn up "Dirty Talkin' Blowjobs Volume 14" it won't be loud enough to drown out spectral pathos.

Defeating Ghosts: Ghosts have no physical presence so they can't be defeated in the traditional sense, but they can be forced to leave your area with a disciplined regimen of ghost one-upmanship. Watch your ghost's behavior and carefully record its various methods of trying to frighten you. Once you feel you have a pretty complete list it's time to start showing the ghost how things are done. If it's levitating furniture then you need to build a device that shoots furniture at high velocity around the room. Does that son of a bitch make the walls ooze blood? Time to hook up some high-pressure pipes to wall spigots and fire massive columns of blood out of the walls! Don't forget about the moaning, a couple crying babies, a staple gun, and a few police megaphones and you have a room of horrors to put even the moaniest ghost to shame. Do these things and any others that would trump your phantasmal friend and before you know it he'll be heading on to greener and less emasculating pastures. 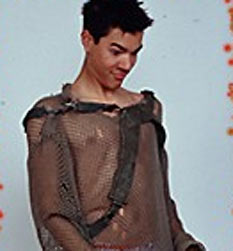 Results may vary.Overview: Vampires are immortal denizens who have contracted a disease transmitted by the bite of a vampire. They crave blood, both human and animal, but unlike werewolves they are like this at all times and only when desperate for blood do they become animalistic. They can usually be easily identified by their manner of dress which can include mesh tank tops, leather pants or chaps, bejeweled cod pieces, Madonna or Diana Ross costumes. Most vampires are in exceedingly good shape other than what are known as "bear vampires" which tend to be hirsute and portly with a predilection towards leather vests and creepy rubber cowboy boots. Bear vampires are like the leaders of the vampires so pray that you do not have to face one of them.

Danger Posed: Vampires generally attack in special vampire clubs where they hold macabre bacchanals in which many of them dress up as members of the opposite sex. There have been several notable vampire hunters throughout the years although most recently powerful vampire mind-slaves in the government have made slaying vampires a "hate crime" with severe legal repercussions. Those Washington fat-cat vampire slaves want to legislate away our constitutional right to tie a vampire to a wooden fence and beat it until it turns to ash. Meanwhile the vampires will probably soon have the right to marry each other, which is just sick, sick, sick people. Wake up America!

Defeating Vampires: The first thing you want to do whenever you're going to bag a vampire is lay down a tarp. Depending on the specific type of vampire they will either turn into ash, which is hard to get out of even Berber stain shield carpet, or they'll dissolve into a smoking puddle of goo which can eat through floorboards in an hour. Once I staked a vampire to a structural beam and when I came back the next morning half of the freaking building had collapsed in on itself. The act of slaying a vampire is pretty simple; either cut off their head or drive a wooden stick through their heart. Sunlight also works but unless you're Jupiter you don't really have the power to shine the sun wherever you want.