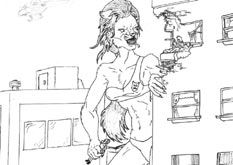 I'm not quite sure what's going on here but I am sure I don't like it.Overview: As implied by their name, giants are very tall monsters that are usually five to ten times the size and strength of a normal man with exceptional specimens getting to be well over three hundred feet in height. The category of "giants" includes your average hill monster who lives in a cave, the wily and elusive Cyclops, and even less massive specimens like the bull-headed minotaur. Giants do not frequently prey upon humans but they are considered omnivores and if hungry enough for feeling threatened they will not hesitate to attack a person. It should also be noted that giants are not inherently evil, but the examples of helpful or friendly giants are so few and far between that they are hardly worth taking into consideration when conducting a carefully planned campaign of genocide.

Danger Posed: Giants tend to be quite docile and favor homes far away from human civilization. Unfortunately, the latter half of the twentieth century has seen a dramatic increase in giant attacks thanks to urban sprawl. With their habitats threatened by humanity many giants have banded together to form primitive communities all too willing to venture into human territory and exact revenge. Because of this you should assume that any giant you encounter is hostile and authorities in your area should be advised to shoot on sight anyone taller than about six feet. Do not attempt to confront a giant unless you are very well armed. Their incredible strength allows them to hurl cars high into the air or do that stupid jumping thing that the Hulk does.

Defeating Giants: The best method for slaying a giant is to carefully stalk it for days to determine its daily routine and hunting patterns. It's fairly easy to remain hidden from a giant so once you have its patterns down you should prepare a well-armed ambush. Depending on the creature's size you may need anything from an Elephant Gun to an artillery piece to bring it down, but one of the great things about being a human is that we've developed all of these really cool ways of making crap explode. One of these methods is sure to fulfill your needs. Once you've killed the giant you will need to dispose of the body by hacking it into pieces and either eating or burying the pieces. You can't leave something the size of Paul Bunyan to rot under the hot sun; he'll stink up the countryside for miles and contaminate the groundwater. 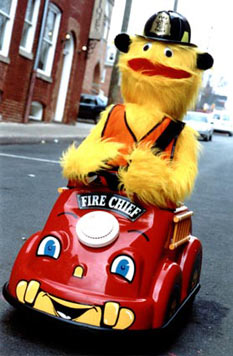 Their lies are elaborate but must not be believed.Overview: Supposed protectors of our homes and livelihood, firemen are actually demons born of no mortal mother and are capable of controlling the wild spirits of fire to their will. Their visages are frightful to behold but they disguise themselves behind human faces and publicly congregate in covens that they refer to as "fire departments". They are capable of projecting flames from their hands or eyes, causing huge conflagrations to spring up from the earth, and they can even melt through solid metal with their bodies.

Danger Posed: Firemen have infiltrated every facet of our society and many even take mates from among the normal human population. While they live their day to day lives often pretending to fight the very fires they create, they are actually working together in some bizarre scheme for world domination. If confronted firemen are prone to react violently by using their powers to attack you. Almost no mortal man could hope to be a match for their eldritch deviltry so it is suggested that you either keep your distance or come well prepared.

Defeating Firemen: In an ironic twist, the weapons which will help you defeat a Fireman are the ones that they keep close at hand. High pressure hoses, fire extinguishers, non-flammable foam, and even buckets of water are all very effective weapons when doing battle with a Fireman. Don't believe their lies about being hardworking American heroes either. They'll try to lure you into letting your guard down with pathetic pleas to stop, but the proof is in the smear of bubbling pudding they leave behind after you've banished them back to hell.

I hope I have prepared you well for the journey into the den of evils that awaits you. Preparedness can go a long way but when you're facing down a cacodemon the only thing between you and digesting slowly its belly are your weapons and skills. Hone that fighting edge and you might just stand a chance.